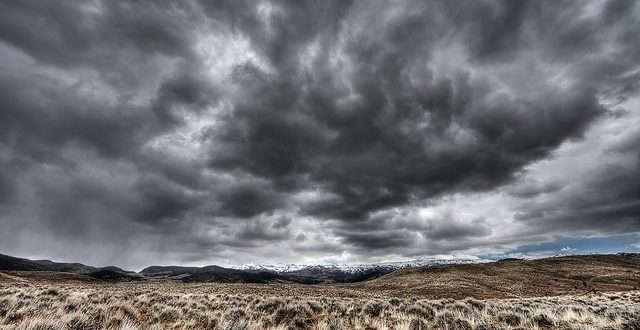 As a little girl growing up in the midwest, I loved thunderstorms. I still do, and its the one aspect of weather in the Inland northwest that I miss: big, flashing storms that send a booming ker-RACK that thuds in your chest. Then a cleansing deluge, a dewy morning, and verdant fields.
In her debut novel “White Teeth,” Zadie Smith (in the voice of a character named Asana) proposes that there are two kinds of people in the world. First, those that live with a sense of constancy on the earth. That the skies and mountains and oceans are stable and reliable such that life can proceed in the trustworthy manner. This describes me well: all the thunderstorms in the world wouldn’t have frightened me because I knew I was safe.
In the second of Smith’s two categories are those who have lived in geographic (or social and economic) contexts where nothing is stable. Land buckles from earthquakes, the seas rise up in tsunami or hurricane, and the wind comes not with nourishing rain but punishing gale force and wreckage. When you grow up with these natural forces at play, nothing is guaranteed or trustworthy. Everything could vanish in a blink.
How is faith nurtured in these two different contexts? How is our picture of God be shaped by our encounter with the natural world, its rhythms and its drama? How do we discern how to live in light of God’s presence and activity in creation?
I think if we find ourselves in the first of Smith’s groups, if we have been given the gift of a childhood held in trust and constancy, if we have known reliable weather and seasons of harvest, then we have a calling to offer trustworthy, constant hospitality to those who are storm-tossed and those who experience great loss.
About a year ago, gale force winds hit our lovely city of Spokane. Trees, hundreds of trees, fell, snapping power lines, blocking roads, and even taking lives. Homes grew cold without power. Folks went days without showering for lack of hot water. And slowly, there grew up a beautiful network of sharing and hospitality. Social media helped, as well as coffee shops, schools, places of worship and libraries. Warmth, in the form of bowls of soup or cozy blankets or reliable beds, began to be shared.
Amazingly, at the same time my local context here was blossoming with practices of welcome and care, the national conversation regarding hospitality sounded radically different. While in the 1980s, our nation regularly accepted upwards of 250,000 refugees a year, President Obama’s meager number of 10,000 seemed to some to be risky and dangerous. Instead of encountering storm-tossed people of other nations as neighbors, many saw a threat. I think this was a sad time when our country lost sight of one of its most beautiful founding tenets: welcome.
The crisis in Syria did not begin as political or economic upheaval. It began with the weather. Drought consumed the region, brought on by climate change and deforestation. Rural populations relocated to the cities in search of work, food and water. Overcrowding led to tensions, which led to conflicts, which led to upheaval.
Yes, that’s a huge oversimplification of things, but I think its important to at least see the ecological source of such a calamity. The children of Syria have never known a trustworthy cycle of weather, let alone a stable home.
And so it is our national and personal calling to open our borders, our homes, our cities, our libraries, our places of worship, our coffee shops and more to Syrians and to refugees of any place. As a friend recently reminded me, “refugee” isn’t a permanent status; it’s a description of a temporary state. Can our work of welcome re-neighbor another? Can we grow trust and constancy where there has only been tragedy? Can we even question our own sense of safety in order that we might see our way to welcome in spite of fears?
I’ve thunder and lightning, and I’ve seen radical hospitality happen. Whatever the weather, may hospitality be our way forward together.
“Faith, Resiliency and Natural Disasters” is the topic of the Oct. 1 SpokaneFāVS Coffee Talk, which will take place at 10 a.m. in the Community Building, 35 W. Main Ave. All are invited to participate in this community discussion. Larson Andrews is a panelist.

Previous Ask A Jew: What are the High Holy Days?
Next Natural Disasters: We have to do our part