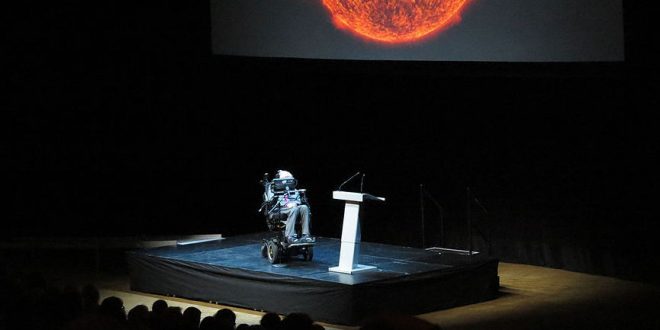 Stephen Hawking: The Stuff Dreams Are Made On

There is no shortage of in memoria for the passing of the physicist Stephen Hawking, who died last week in his home in Cambridge, England, aged 76.  The fellow was the stuff of epic: brilliant physicist, struck down by ALS Lou Gehrig’s disease, reduced to a contorted figure in an electric wheelchair … but not struck down, as his work continued, his fame grew, his synthesizer “voice” he began to use in the 1980s as instantly recognizable today as any singer or movie star.  A pop icon whose appearances on television shows from “Star Trek: the Next Generation” to “Futurama” to “The Big Bang Theory” imbedded him in the culture and our collective hearts, even as his work on black holes pressed on into the deepest crannies of the nature of space and time.

I’m old enough to remember when black holes were not objects of actual science, observable and tractable, but merely a strange hypothetical lurking in the corners of abstract physics speculation.  And now, they’re almost commonplace, the seed corn of galaxies, as numerous as the grains of sand on a beach.  Stephen Hawking helped make that leap possible.  And all from that wheelchair, the synthesizer voice droning on.

We love our symbols.  They’re cues we latch onto to remind us of meaning.  Isaac Newton was born on Christmas Day in the year Galileo died.  And Stephen Hawking died on the 14th of March (Pi Day), which happens also to be Albert Einstein’s birthday.  Meaningful coincidence.  We make them thus.

Hawking never stopped being a scientist, though, defending his positions with the rigor of advanced mathematical physics that seem like magic talismans to outsiders, and always admitting his mistakes, from his “biggest blunder” (thinking information could be lost in the churning singularity of a black hole), to his cheeky bet that the fundamental particle Higgs boson would never be found.  The science juggernaut has been confounding us all.

Hawking always paid up on his failed bets, with what could pass for more of a smile in the lip quivers of his ALS-ravaged body.  He kept paying up on that too.

Were there times of weeping rage and silent despair as his body shrank and his range of movement contracted like the spaghettifed entrant to a black hole?  I can’t imagine he was free of such moments.  And yet, there was always the work, his mind and wit as agile as ever.  And he would not give up.

So the man must have taken some earned pleasure in the last electronic laugh of his life, as he became the most famous physicist of his time, known in the popular culture in a way only Einstein could match, and working against still greater obstacles to do it.  What prophet would have been so rash to predict such a thing, half a century ago, as the brilliant young physicist stared ahead at what awaited him as the ALS inevitably ground him down?

Hawking hung on way longer than any medicine expected, his chanting electronic voice acting as a beacon for all with “disabilities” … we remain the stuff that dreams are made on.  We make our dreams real.  And we live on in the dreams of others.

You can even imagine hearing that in Hawking’s synthesized “voice” … be honest.  You can.

Previous POEM: There’s no such thing as a free lunch
Next Lent: A Time to Learn