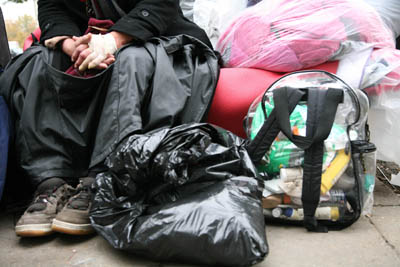 It has been about two years since the Spokane City Council passed an ordinance that restricts panhandling, sitting and lying down on sidewalks and rights of way. While I have noticed a decrease in the number of panhandlers on the streets (and this may be unique to me),  the number of homeless people doesn’t seem to have decreased. And this leads me to question the effectiveness of the ordinance.

I further believe that it is not a worthwhile venture to address the symptoms if we do not address the problem (how does that old saying go? You don’t put a band-aid on a bullet wound?). And while the key question that needs to be asked is “how do we eradicate homelessness,” most of us are better suited to educate ourselves on how to care for the homeless.

It does not need to be an intricate plan. About 10 years ago a friend of mine from high school started collecting backpacks and bibles. She planned to distribute these items to all the homeless people she could find in our hometown. I felt obligated to ask some very basic questions.  “How are you planning to distribute these supplies?  What is your purpose?  Don’t you think they would rather eat than have a Bible to read?” I did not intend to take the wind out of her sails, but she was not thinking about the needs of the homeless on a day-to-day basis. The most basic needs are food, water, warmth, shelter and security (according to Maslow). To put it plainly, were I homeless, I would rather have a sandwich than a Bible.

So what do we do?

1 — Start simple. Serve a meal at Shalom Ministries. Donate new socks to Catholic Charities. Spend some time sorting food at Second Harvest. (There are MANY other charities in Spokane that work with issues of hunger and homelessness).

2 — Have a conversation. When you are serving the meal at Shalom, talk with the men and women coming through the line. Join them at the table for a meal and hear their stories. It is likely that you will make an unexpected connection.

If you have already done steps 1 and 2 and are searching for more, consider taking a board position in the charity. And if that is not enough, you may just be called into a life or career of social justice relating to hunger and homelessness.  Reject the notion that homelessness is an unsolvable problem.

Matthew 26:11 tells us that the poor will always be with us.  But will we claim this as a challenge or will we simply use it as an excuse?