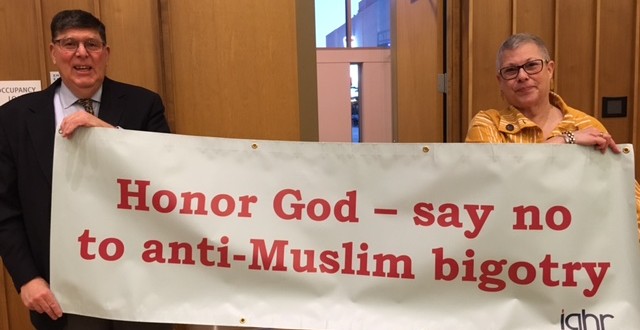 Rabbi Charles Feinberg, left, executive director of the not-for-profit Interfaith Action for Human Rights, and Sandra Miller, of Seekers Church in Washington, D.C., hold up a banner created by Interfaith Action for Human rights in the hopes that houses of worship will order and prominently display them. Religion News Service photo by Lauren Markoe

(RNS) The banners proclaim it in large, red letters: “Honor God — say no to anti-Muslim bigotry.”

Rabbi Charles Feinberg, executive director of the Washington, D.C.-based Interfaith Action for Human Rights, the organization that conceived the idea for the banners, keeps the prototype in the front seat of his car and unfurls it whenever he’s among a large group of the faithful — no matter their religion.

His aim is to get churches, synagogues and other houses of worship to order the banner, and plant or hang it prominently in public view.

“We would love to see many, many communities — many different religious communities — display it on their properties as a sign of support and as a way to counter some of the hate speech in our communities,” Feinberg told an interfaith gathering in Silver Spring, Md., recently.

The room gave him a warm round of applause, and a few people raised their hands, gesturing that they would be placing an order.

Feinberg said a handful of houses of worship have signed on so far to the banner campaign, which IAHR is promoting with Shoulder-to-Shoulder, an interfaith group created to oppose Islamophobia, and T’ruah, a human rights organization led by Jewish clergy.

“Our best clients are in Austin, Texas,” he said. A Unitarian-Universalist church and a Congregational Church there have each bought one. The board of a Conservative synagogue in Washington, D.C., will vote at its next meeting on whether to display one on its property.

The banner campaign was inspired by other banners that have shown up on houses of worship in support of other causes in recent years. “Black Lives Matter” is a popular banner at more liberal churches, as is one that proclaims “Marriage Equality.”

The banner campaign against anti-Muslim bigotry is also offering a version that reads “We stand with our Muslim neighbors,” and another that says a particular house of worship “stands with Muslim Americans.”

(Lauren Markoe is a national reporter for RNS)

Previous March Coffee Talk: Faith and the Democratic Process
Next The United States of America: One nation not quite under God