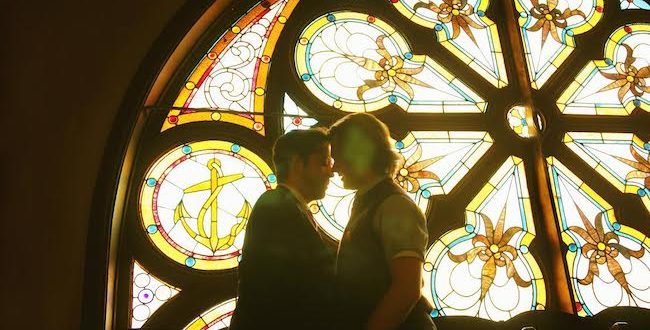 Stage Left presents “Bare,” a story of forbidden love & identity that will have you exploring your faith

So much left to say,
Trapped alone here with my
Best laid plans astray.
Standing scared outside
A cold church, soul search,
Seeking some lost answer
From a God who loves me.

Over the next month, theatre goers in the greater Spokane area have an opportunity to attend “Bare, a Pop Opera” at Stage Left Theatre, a theatre that was founded in creating challenging conversations in our community. Stage Left seeks to present theatre that can be used to expend societal, political, and intellectual conversations, and their newest staging puts identity, religion, and navigating family dynamics in the spotlight.

This past winter, when it was announced that “Bare” would replace “Three Penny Opera” in Stage Left’s spring line up, I was taken aback by the utter excitement and energy of some of my theatre friends (mostly younger than I) about this show.   I had never heard of “Bare,” and so I had no frame of reference to understand why they felt the music, and the story, were so captivating.  A pop-opera about forbidden love is a bit unique in its format, but not necessarily in content.  Even Shakespeare used prior stories as source material to give his classic Romeo and Juliet life.  “Bare“ builds on the Shakespearian framework of the forbidden love, and explores the seven deadly sins, as they occur in a private Catholic high school.  The limited dialog is stark and raw (mirroring conversations I’ve overheard in Spokane public school hallways – where no words or topics appear to be taboo), while the lyrics and music pull emotions along a full continuum.

“Bare” was originally produced in 2000, and sometimes gets the mislabel of being the “gay Romeo and Juliet.”   While homosexuality and battling with a closeted identity is a focus of the show, simply labeling it as a coming out play really limits the discussion and ignores the broader aspects of the production.  In 2012, writers attempted to re-work Bare into a musical that fit into the changing landscape in America, including the “it gets better” movement.   The reworking was hollow and shallow, and missed on all targets.  Stage Left goes to the original 2000 work, and focuses on the timeliness and universal language of the piece to launch the discussions.  Scott Miller, who plays the tortured Jason in the production said, “It is such a beautiful work, with so many layers…I don’t think there is anything that speaks to what is going on now more that this work.”  Director Troy Nickerson echoed this idea.  When he became aware of the musical when it first came out, he fell in love with the power of the story and the score.  And, while hoping in many ways that by 2019 the themes would be passé, he sees this show as being needed in the world now, maybe more than ever.  “I think kids are more accepting today….but then, I don’t know.  In my director’s notes I talked about hoping this show would no longer be relevant, but I really think it is more relevant than ever, and that we may have even taken steps backward.  It doesn’t just talk to the gay thing – but kindness and how we treat one another and bullying.”

While parts of society have changed since 2000, high schoolers of all genders, identities, and cultural backgrounds have an uneasy path as they seek to understand themselves, and their role in our changing culture.   Teen suicide rates remain incredibly high as students may not know how to deal with the incredible amounts of pressures.  When we look at marginalized gay and transgender kids, the suicide rates are staggering.  Seeing social media and news sources from across the nation confirm the angst.   Hyper-masculinity, trying to fit expectations, peer pressures, body image, and familial social standing all are topics in “Bare.” “Bare explores a community that includes both straight and gay people, all struggling with the complexities of being young in contemporary America”.  The story not only follows the kids in their peer to peer interactions, but identity and belonging within family and familial legacy are key to the story.  Parental expectations haunt the students as they search for a voice and a future.  At a recent rehearsal, after hearing Claire, played by Abbey Crawford, sing in the second act, I texted my wife to make sure we bring tissues with us when we attend opening night.  It is haunting and crushing, and, incredibly human.

The raw emotion in the work will make you uncomfortable as it moves along the confusing paths that the characters (and each of us) have trod.  “Bare” brings the audience into deeply gray areas and asks us to dwell there for a time.

Nobody can engage with “Bare“ without exploring organized religion, dogma, and faith.   “Bearing your cross” comes in musically and thematically in the first act as the seven main characters parallel the seven deadly sins.  As young kids, the idea of sins and confession tends to be relatively simple, as being a “good boy” or “good girl” is the goal.  However, for these characters, their elementary understandings of theology change, and they reach out to various places – some safe and others fraught with danger – to fill the holes in their understanding.

Many have attacked “Bare” as being extremely anti-catholic.  In fact, the musical landed on the Catholic League’s 2000 Report on Anti-Catholicism.  While the play takes place in a Catholic School, and a flawed and conflicted priest is sought for counsel, Catholicism itself is not as important to the story as the institutions and people that the characters seek advice, nurturing, and healing from.  In 2000, Variety latched onto the idea that “Bare” was simply an examination of how organized religion had no capacity to deal with homosexuality, and this theme may have been central in the original production.  However, various churches have moved on questions of homosexuality and acceptance in mainline religion.  That isn’t to say there isn’t infighting and theological wars occurring, but the religious landscape has changed.

Troy Nickerson, director of Bare at Stage Left, doesn’t see this production of “Bare“ as an indictment of the church.  “People for some reason have created the idea that the show is bashing the Catholic church, but I don’t find that to be true at all.  One thing that I like about this show – all of the kids, their faith stays strong.  It’s that – what happens when you come up through a system, a school or whatever, when you’re indoctrinated into it and then you go to them when you are in trouble, and they turn their back on you?  You get in trouble, or are gay, and they don’t have answers?  The Catholic church has been famous for some of that, but they’re not the only one — and for Jason in the show – it isn’t just the church.  It is also the institution of family.  These kids, Jason in particular, have no support.  We know that support makes all the difference.”

“Bare“ is a dark and beautiful show.  It challenges religion and dogma with an eye toward human emotions and how we relate to one another.  Stage Left’s mission to create discussion is met with this show.

No voice, no sound.
No sound, no words.
No words, no song.
No song, no heart.

One heart, one love.
One love, one light.
One light, one truth.
One truth, one life.