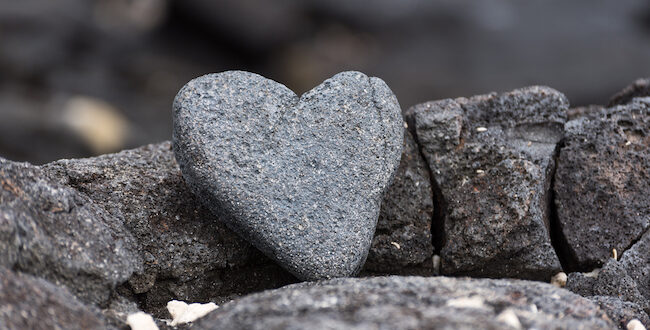 For years, we have watched TV news videos of people angrily throwing rocks in city streets. Their targets are usually police or military personnel. Rock-throwing is an international symbol of frustration and situational impotence. Tragically, expect rock-throwing in Ukraine now!

That image came to me as I reflected on one of the more famous and perplexing of the Jesus stories, John 8:1-11. A woman is brought to Jesus after some religious leaders “caught” her in the act of adultery. Strangely, she was brought alone.

Hmm. Her adultery partner was nowhere to be seen. A faithful skeptic might think she was set up.

The confrontation between the religious leaders and Jesus makes for good drama as they try to trap him. They dehumanize the woman. He restores her humanity. They emphasize her sexual sin. Jesus calls out their sins of social and personal manipulation.

They expose their own moral hypocrisy. Jesus challenges their moral decency to walk away from that same hypocrisy. (“Whichever one of you has committed no sin may throw the first stone at her.”) Why would he do that? Another Hmm.

Even in the short time this drama plays out, I can imagine one of the accusers busy in the background, gathering stones into a pile so they can quickly stone the woman when it’s time. Stones of self-righteous anger?

Likely. But not different from the metaphorical stones of impotence gathered and thrown by many people these days. Regardless of why stones are gathered, they’re gathered for one basic reason: to lash out, to retaliate toward a real or perceived enemy.

Hearts of stone-gathers lose their original flexibility. Their hearts begin to calcify. The plaque of inflexibility, fear, or self-righteousness withers the life-giving power their hearts were born with.

God’s radical grace shocks everyone in this story, except Jesus. Contrary to all expectations, Jesus doesn’t condemn the stone-gatherers. He unexpectedly offers them an alternative way to experience life.

The outlandishness of this story comes to my mind when I sing verse 2 of one of my favorite hymns, “Here I Am, Lord”:

I, the Lord of wind and rain, I have borne my people’s pain,
I have wept for love of them, they turn away.

I will break their hearts of stone, give them hearts for love alone.
I will speak my word to them, whom shall I send?

Religion too easily showcases “situational impotence” when it substitutes legalism for Gospel Grace. When the religious leaders pompously parade the woman before him, Jesus doesn’t respond with the legalistic answer they expected. He breaks – or at least cracks – their hearts of stone with a deep touch of humbling truth.

We’ll never know what was in their hearts as they silently slinked away. But hopefully, we know our own hearts when Grace stands up to our baser impulses. For that moment, Grace offers us a safe space where God’s root-deep love for us eliminates our need to pretend.

And suddenly, we and the woman are one as Jesus looks at us. “Where are they? Is there no one to condemn you?” In that moment, we have no need to condemn ourselves, either. Nor do we need to defend ourselves by attacking someone else. What a different feeling!

“Go, but do not sin again.” Nothing said about our moral failures. “Sin” is always about “separation” – those actions that separate us from embracing our best human impulses, from letting God love us, from loving and serving others.

I sometimes wonder if Jesus might also be saying: “Go, and find ways to love yourself, love God. An added bonus? You’ll find more chances to love others, not separate yourself.”