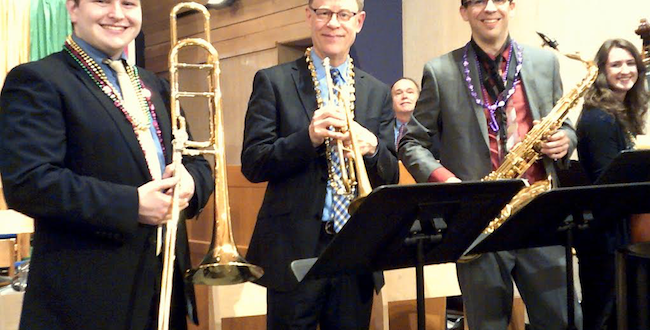 Every seat in the house was full last night as the congregation of St. Mark’s Lutheran Church and guests gathered to hear the Fat Tuesday Jazz Mass. According to members, the annual event frequently sees a large turnout.

Fat Tuesday is the feasting day which marks the beginning of Lent, the 40-day fast culminating with Easter in Christian religions. In similarity to Thanksgiving, it is a holiday meant to impart the values of acceptance and welcome, of giving and forgiving, and of cherishing important values.

Throughout the Mass, the open space rang with the cheerful notes of the Spokane Jazz Orchestra and pianist Carol Miyamoto, and the unified voices of the St. Mark’s Chancel Choir as they performed hymns arranged by Dan Keberle, a professor of music at Whitworth University.

The sermon, given by the Rev. Matthew Larson of Advent Lutheran Church, was on the subject of “home.”

He said, “There’s something about this theme in America of starting and ending at home,” giving the examples of baseball, in which one starts and ends at home plate, and of “The Wizard of Oz” in which Dorothy first wishes herself away from home and then back home again, to demonstrate the point of how things come around full circle.

An example in the Gospel of Luke was given, Luke 15: 11-32, which highly paraphrased speaks of a man who squanders his share of the family fortune and is ashamed to return home. However, when he finally does return, his father welcomes him with celebration. The man’s brother, who plays the role of questioner in this fable, is disgruntled that the brother who squandered should be treated specially, while he himself has worked hard. The lesson that the father passes to the angry brother is clear: that, while they two have had each other, their brother/son has been alone, lost, and lacking, and his return to them is something to celebrate.

Larson seemed to suggest that a problem may exist if churches were to become unwelcoming, as he feels that coming to a place of worship should feel like returning home, and where we feel that, we should extend it to others. As he puts it, “We should extend the mercy we have felt ourselves.”

The offerings gathered for this event went to the Christian non-profit group Feed My Starving Children, which works to provide nutritional food to malnourished children across the world.