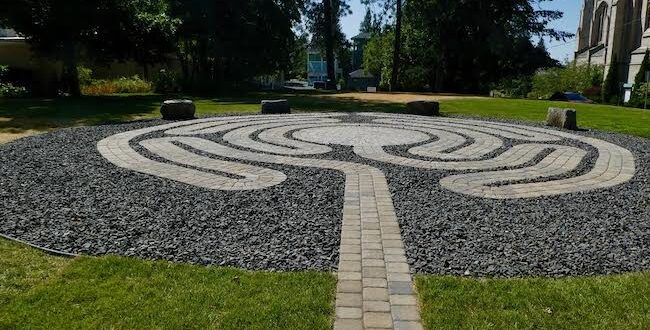 Polly McMahon may have died in November 2017 after a decade-long battle with cancer, but her spirit and heart for service lives on with the help of her chosen sisters, Judy Noel and Nancy Cartwright.

In trying to find a way to honor McMahon and her life of service, Cartwright and Noel spearheaded the construction of a new outdoor labyrinth at The Cathedral of St. John the Evangelist. It is located on the south side of the cathedral across the street from the Welcome Center on 12th Avenue and is available for the entire community to use. Concrete pavers form the 12 circuits of the labyrinth and black basalt lies in between the circuits.

It was last fall that they presented the idea of the labyrinth to the leadership at St. John’s Evangelist Cathedral. They found there were several ways the labyrinth could be constructed, including with the use of a kit. But as time went by and COVID-19 hit, they got in touch with Environment West Landscape Services to create it, as the firm had previously worked on the church’s columbarium where many parishioners’ ashes are interred.

Parishioners at St. John’s used to sometimes chalk a labyrinth where the permanent labyrinth in McMahon’s honor now sits.

Labyrinth work wasn’t the only thing McMahon was involved in inside or outside the church. She was a professor at Spokane Community Falls College in the Human Services and Gerontology Departments. According to Noel, a colleague in the department, she “single-handedly headed up the Gerontology and Social Services programs” and was always bringing in and mentoring students the entire way through their student careers.

She brought people in the community together whether she was teaching, playing the harp and then the cello in New Horizons orchestra, feeding students and strangers, teaching Sunday school, or volunteering her time in other various ways.

“There’s people all over the community that say they owe their life to Polly,” said Noel, “that she helped them turn a corner and find a whole new career and satisfaction in life. […] People would come to the community college from different places in the world that had suffered a lot and she would take them under her wing and now they’re leaders. It’s amazing.”

Cartwright said she knows that McMahon would want the entire community to be able use the labyrinth. It’s not just for parishioners of St. John’s. It’s open to anyone who wants to come and use the space and walk through it.

“Polly would have never promoted this,” said Noel. “She was the most humble person. Nancy and I and other people in the community wanted to do something to honor Polly.”

The labyrinth in McMahon’s honor is the second at St. John’s Evangelist Cathedral. The first labyrinth is up on a high bluff and not easily accessible for most people. Cartwright said although it was talked about, instead of refurbishing the older labyrinth, McMahon’s final, posthumous gift to the church is the stone and paver labyrinth, which was finished a few weeks ago.

Due to safety regulations put in place due to COVID-19, there cannot be a full dedication of the labyrinth and celebration of McMahon until 2021 or until things are safe. However, there will be a blessing of the labyrinth at 4 p.m. Friday, Sept. 4 with just those closest to McMahon and who have been involved with the project since the beginning. The blessing will be live-streamed on the cathedral’s Facebook page.

Ashley Centers resides in Moscow with her cat Bowie. She is composed of equal parts white coffee, sunshine and music. She’s an activist, author, bibliophile, music lover, empath, wheelchair user, and feisty. She believes that everyone has a story to tell and wants to help tell those stories. She has written for two different college newspapers, Inland 360, Home and Harvest magazine and has published a collection of poetry that is available on Amazon. She can be reached at burnintruthbeloved@gmail.com

Previous Chronicles of Corona: East Palo Alto
Next Which Explains Our Culture Best: Evolution or Creationism?