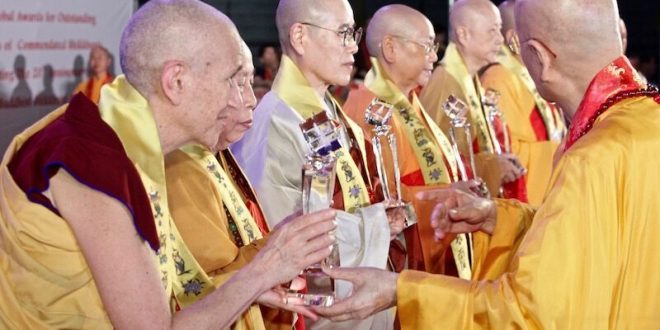 NEWPORT — Venerable Thubten Chodron, founder of Sravasti Abbey, was one of 50 nuns recently recognized worldwide for her contributions to Tibetan Buddhism.

At a ceremony in Taiwan at the end of 2016, which was attended by an unanticipated 15,000 people, she received the Global Bhikkhuni Award, presented by the Chinese Buddhist Bhikkuni Association of Taiwan. It’s the first time the award was offered.

She said the event was significant because it was the first time bikkhunis (the Pali word for fully ordained nuns) were honored in such a monumental way.

“We acknowledge that Buddhism is international and expanding, and women are at the forefront of that development,” chairperson of the association, Ven. Pu Huei said.

In Taiwan, where Sravasti Abbey nuns receive their full ordination, bikkhunis make up two-thirds of the monastic community, yet oftentimes aren’t recognized on the same level as their male counterparts.

Chodron said the ceremony, which some have called “The Academy Awards for global bikkhunis” was heartening.

“I think it does encourage women in general, and I think it affects the men in a good way too,” she said. “I’ve heard men saying they don’t feel comfortable when women are discriminated against or left out.”

“Just to be there surrounded by women like that was like whoa. All these women are shakers and movers,” she added.

Chodron and Ven. Pema Chodron, a well-known Buddhist nun and author, were the only two American Buddhist nuns to receive the award from the Tibetan tradition.

In an announcement the association stated they selected Chodron as an honoree because by establishing Sravasti Abbey 13 years ago, she’s helped preserve, protect and promote Tibetan Buddhism.

The abbey, located about 40 miles north of Spokane, is the only Tibetan Buddhist training monastery for Westerners where one can receive full ordination.

When she became ordained in 1977, it wasn’t her intention to establish a monastic community, Chodron explained. She had planned to stay in Asia, where she was studying, but with so many people in the U.S. interested in learning about Buddhism, she found herself eventually teaching in this region.

“I just do what I do and hope it benefits people,” said Chodron, who has written 16 books on Buddhism and edited 10.

Today Sravasti Abbey has 13 monastics and two trainees. The sisters have become active and visible throughout the area; leading regular meditation classes in Spokane, speaking in hospitals, leading classes at Airway Heights Correctional Facility and serving on the board of Youth Emergency Services in Newport, to name a few. Many of the bikkhunis also recently participated in the Women’s March in Spokane.

“When we first started there weren’t many of us here, so we couldn’t go out as much. But our intention has always been to be active in the community,” Chodron said. “We want to support what is good and valuable in the world. When people do things that align with our spiritual values, we want to show our support for it.”

The abbey also hosts numerous retreats and classes throughout the year. In May they’ll host Jan Willis, author of “Dreaming Me: An African American Woman’s Spiritual Journey.” She’ll be at the abbey May 19-22 for a weekend retreat titled, “The Three Principal Aspects of the Path.”

The Global Bhikkhuni Award is expected to be presented every three years.