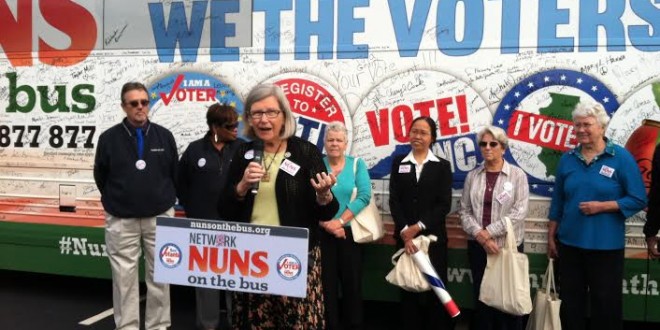 Sr. Simone Campbell speaks on her Nuns on the Bus Tour/NETWORK photo

Pope Francis told Congress to remember those trapped in the cycle of poverty and to find ways to give them hope.

“It goes without saying that part of this great effort is the creation and distribution of wealth,” he said.

It’s a message Sister Simone Campbell has been advocating for years, and on Sunday she’ll say it again, this time to the Washington State University community in Pullman.

“So often people think there’s nothing that can be done, that’s just how it is,” she said. “But what we know is that policies actually created this mess we’re in, so policies can make a difference.”

It’s the 36th Roger Williams Symposium, which is a lecture series focusing on issues surrounding social justice, ethics and faith. The symposium also marks the 50th anniversary of the Common Ministry, which is a a progressive ecumenical organization that works with students to promote dialog, peace and unity.

Campbell said she’s especially excited to talk to students and encourage them to fight for change. According to the U.S. Census Bureau, 46.7 million Americans — nearly 15 percent — live in poverty.

“We just have to put our minds to it, and a collective political will,” she said. “We give up too quickly sometimes.”

Part of the solution, she said, is listening to one another’s stories. The Nuns on the Bus mission is to travel through the country’s heartland and collect stories that “break open our hearts,” and then share those stories with Congress. Stories, she said, help bridge differences which can in turn transform politics. This year’s bus tour is titled, “Bridge the Divides: Transform Politics.” In previous years the bus has driven across the country gathering stories about a “faithful budget,” immigration reform and voter turnout.

She tells her own story, and experiences from the bus tour, in her recent book, “A Nun on the Bus.”

Campbell, who is also a lawyer, has been working for social justice since the 1970s and is currently the executive director of NETWORK, a national Catholic social justice lobbying organization. Throughout her career she’s ruffled more than a few feathers. In 2012, for instance, she slammed Congressman Paul Ryan’s budget plan during the Democratic National Convention. His budget proposal is what prompted Nuns on the Bus. That same year her organization was reprimanded by the Vatican for supporting Obama’s healthcare overhaul.

She said she’s not afraid to take the heat for speaking boldly.

“I’ve always known the urgency of now and have never been shy about putting it out there. Life’s too short,” she said. “We have work to do.”

Jessica Stokes, director of Campus Ministry, said the symposium is a way to bring the conversations happening on a national level to the local community

“With the elections and the pope, she’s a really relevant speaker,” Stokes said. “She’s truly perfect for this.”

Stokes said she hopes students will be encouraged by Campell to take what they’re learning in the classroom and hit the pavement.

She added that all are welcome to the symposium, including non-students and people from various faith backgrounds.

“I think Sunday night’s conversation will something anyone and everyone can benefit from, I really do,” she said.

Campbell will speak at 6 p.m. Sunday at the Gladish Community and Cultural Center, 115 NW State St. in Pullman. Her talk is titled, “Mend the Gap: Heal the Divides.” Her presentation is free. Then, on Monday morning, she’ll lead a workshop at St. James Episcopal Church and at 3 p.m. will give the “Thomas Foley Institute Lecture” in Bryan Hall 308 on the WSU campus. Tickets for the Foley lecture, titled “Justice for All”, are $10.

Previous Scandalized by Francis (No, the Other One)
Next How should we respond to migrants, refugees?

[…] often scotch tape is used to start a presentation on global economics and income inequality. But Sister Simone Campbell is used to using unorthodox ways to get her message […]