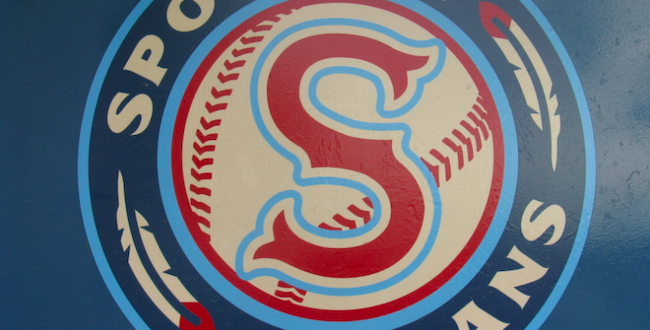 As discussions on race spread throughout the United States and provide Native Americans with a platform to let their voices be heard, racism in sports teams’ names and imagery has been brought to the forefront again with the controversial Washington Redskins football team.

With the team is reportedly announcing today that it will scrap its team name and no longer use Native American imagery, it, along with other teams across the U.S., could follow in the footsteps of the Spokane Indians Baseball Club, who collaborated with the Spokane tribe to reshape their team into one that used the tribe’s culture in an accurate way and encouraged people to learn more about it.

In 2018 Chris Duff, president of the team, told me how they have had a strong relationship with the Spokane tribe and, in 2006, worked together to use Native American imagery in a positive way and created a new logo for the team. Duff said they utilized the eagle feather in the primary logo because of its importance to the tribe, as well as incorporated Salish, the tribe’s language around the logo on hats.

Not only that, they incorporated Salish into their jerseys in 2014 and have signs and other aspects of their stadium in the language, in order to immerse people into the tribe’s culture and world. Duff also told me that they prepared cards that told the story of how the team worked with the tribe to come up with the idea and draw attention to the language.

The fact that the Spokane Indians Baseball Club took the opportunity to collaborate with the Spokane tribe, and educate people about its culture, shows that sports teams can use Native American symbols and culture to teach people about the diverse tribes across the U.S., dispel stereotypes and potentially help revitalize Indigenous languages that continue to lose fluent speakers every year.

Sports teams should go about this by communicating with local tribes on a regular basis and use the feedback given to ensure that they are not perpetuating stereotypes or portraying their cultures inaccurately.

There are people who still perceive Native Americans as stereotypes and by changing how they are portrayed in sports, it could spark a movement that could eventually annihilate the stereotypes and stop people from viewing Native Americans through outdated and inaccurate lenses. Racist names such as “redskins,” and use of headdresses and mascots should be removed and replaced with what the tribes view as culturally-accurate and appropriate imagery.

By following in the example set by the Spokane Indians Baseball Club, teams across the U.S. can relinquish sports of the dehumanizing imagery of Native Americans that has plagued them for so long and shine a spotlight on the diverse Indigenous cultures that have been left in the darkness.