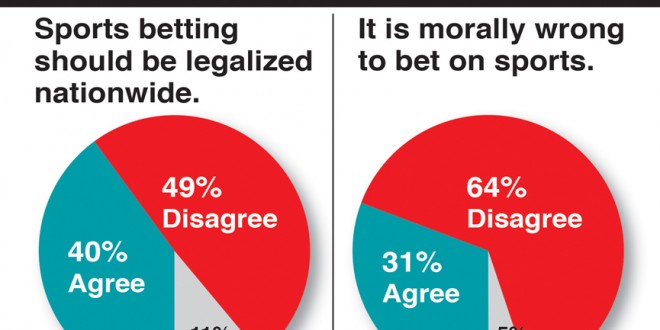 Sports gambling gets a moral pass from most Americans

(RNS) With NFL conference championship games set for Sunday (Jan. 24) and millions of Americans poised to bet money on their fantasy rosters, a new survey finds most have no moral issue with sports gambling.

Even so, a significant number also draw the line at legalizing sports betting nationwide. And the country is split on the question of whether daily sports games sponsored online should be illegal.

Companies such as FanDuel and DraftKings offer prizes as people risk money on the performance of the hypothetical teams on their fantasy rosters. Both games are under fire from some states’ attorneys general. They allege the games are a form of online gambling outside state laws.

But only 40 percent agreed “sports betting should be legalized throughout the country,” with 49 percent disagreeing with that statement.

There’s a statistical tie on whether daily fantasy sports are legal — 47 percent say yes and 46 percent say no. That’s within the 3.6 percentage point margin of error for the survey of 1,000 U.S. adults, conducted Sept. 14-28 by landline and cell phone.

A majority of support for legal sports betting came chiefly from men, from people under age 35, from people with no religious identity, and from people who say they rarely or never attend church.

Opposition runs highest among religious Americans. Almost six in 10 with evangelical beliefs (58 percent) say sports betting should not be legalized throughout the country, and 57 percent believe daily fantasy sports should be illegal.

“We don’t see a majority in any group saying it’s morally wrong to bet on sports,” LifeWay Research vice president Scott McConnell said in a statement. “For more Americans to want something to be illegal than find it immoral is an interesting situation.”