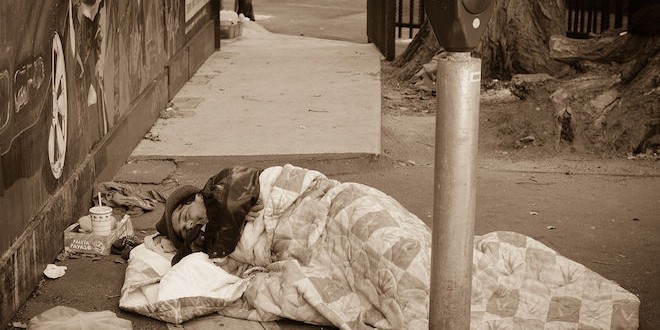 I don’t live up to this value that I hold. As a part of the Body of Christ, I hope to be truthful to myself and others. It is a daily struggle.

It seems the city of Spokane has a similar struggle to be truthful about legislation, its meaning and intent. Last winter, city council passed legislation that expanded a law already on the books called the Sit/Lie Law, regarding people sitting or lying down on sidewalks. But in fact, the law is not about sitting or lying down. It’s about being homeless.

Apple just released the iPhone 6. Around the downtown Apple store, people flocked to be the first in the door to purchase this new phone. Some camped on the sidewalk. Some were sitting and lying down, in the hours stated in the law when that behavior is prohibited. But these visitors to downtown Spokane are not subject to the law. The Inlander questioned SPD for not enforcing the law and received this reply, “The thing for us is as long as they’re not causing an issue for other people to get around,” says Teresa Fuller, a public information officer for the department. “The issue is when we have homeless people sitting and lying, trying to get in people’s way to get handouts, that sort of thing.”Homeless people. People getting in the way. It mattered not that some of the iPhone campers brought RVs and ran extension cords in order to power devices while they sat. In my mind, this is pretty blatant. The law should not be named Sit/Lie. It should be named for its intent: to shove the homeless (or whatever type of person is deemed undesirable) out of downtown Spokane.Something like: the Law of the Undesirables. The Homeless Banishment Law. Ruffians Go Away Law. The No Shower No Power Law.Again, from the Inlander:

SPD spokeswoman Monique Cotton says not citing the Apple crowd isn’t a case of playing economic favorites. “Our officers are extremely fair and understanding in explaining to people the reasons we need keep these areas open,” she says. “This is a short-term event with individuals engaged at that location for a purpose — an economic purpose. It doesn’t pose reasonable safety or quality of life concerns.”

People engaged in an economic purpose. These we accept into downtown Spokane. Ah. Now its clear. First, that is the definition of playing economic favorites. And second, if that is the legislation’s purpose, let’s be truthful about it.Lastly, and most importantly, let people of faith in every flavor speak up against this. Hegemony doesn’t always look like it at first. It sneaks in seeming nice and reasonable. Sure we’d like to walk along downtown “unencumbered.” Unbothered by the needs of others. But this world is filled to overflowing with need, hurt, injury and sorrow. To wall ourselves off is to perpetuate a lie that only great wealth can build: All is well. Let me buy my new phone in “peace.” A peace which is not peace at all but the purchase of false tranquility. I’m afraid those new iPhones are not going to call us out of this false tranquility, either, but only expand our ability to flee our neighbor’s needs.I think the falseness of the law has been exposed this week with the special treatment of the Apple customers. I’ve been trying to imagine a different commercial event that would attract a less desirable clientele, and so draw the attention of the SPD. If people camped out for…Phish tickets? If people slept on the sidewalk to buy…the memoir of Joan Baez? Would SPD say it was time to clean the streets of potheads and pacifists? I’m not sure. What worries me is that the law is already being used as a tool to express a measurement of who can or cannot be on the street for long periods of time.Maybe its time to dust off my camping chair and test the law myself.