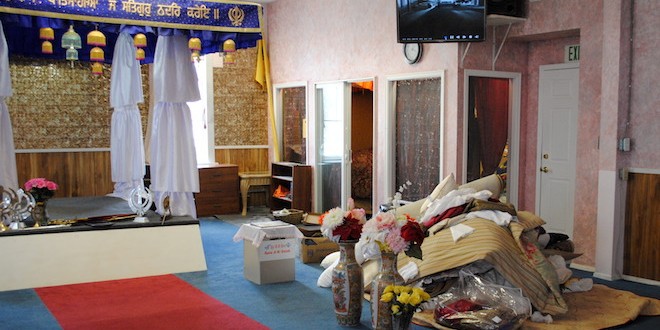 SPOKANE VALLEY – A man broke into the Sikh Gurdwara of Spokane last night causing an estimated $30,000-50,000 in damages.

Around 3:30 a.m. a man was found by temple volunteers, naked, hiding in the temple’s worship center. His clothes were found in the bed where the Guru Granth Sahib is kept. The Guru Granth Sahib is the Sikh’s sacred text. The text was destroyed by the suspect, which Babaji (the spiritual leader of the temple) said is one of the most disparaging acts one can do to the Sikh people.

The suspect, who was later caught, also sprayed a fire extinguisher throughout the gurdwara. Volunteers are still cleaning up the yellow powder.

He also damaged other sacred items, including ceremonial swords, and spilled sacred water that was brought to the temple from India.

Babaji said nothing was stolen. He also said the man had never visited the temple before and may have had mental health issues.

Sheriff Ozzie Knezovich said the suspect broke in randomly, may have been on drugs or have a mental illness, and when he noticed the icons thought the temple represented the Taliban or ISIS and began causing damages. He said charges will likely be filed today.

The Spokane Interfaith Council is organizing a press conference at 4 p.m. at the Gurdwara, 1420 N Barker Road inn Spokane Valley where religious and political leaders and law enforcement are expected to speak. The public is invited to attend. The council has also started a GoFundMe campaign to help the gurdwara.