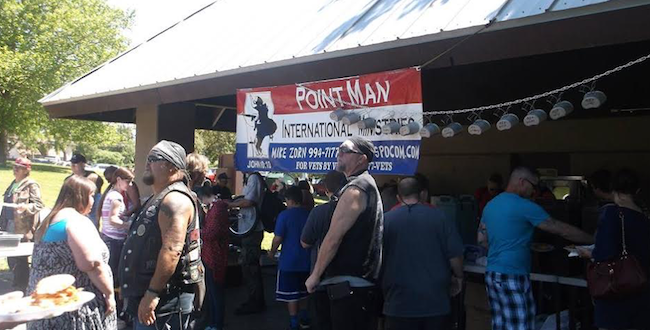 William Tecumseh Sherman once said, “War is hell.” If that’s true, then the transition back to civilian life after military service is a kind of purgatory. Finding one’s way out of hell often requires a helping hand. Point Man International Ministries, which has an outpost in Spokane, has been offering that hand since 1984.

Recognizing the kinds of problems that transitioning veterans face, which often include repeated arrests, Seattle police officer and veteran Bill Landreth began the ministry as a way of reaching out to suffering veterans to help them and their families deal with the difficulties of switching from military to civilian life. After Landreth’s untimely death in 1986, Chuck Dean took over the group and combined it with the self-help publication “Reveille.”  Under the current president, Dana Morgan, the group still functions with the same mission Landreth originally had in mind: “To connect hurting veterans as well as their families and friends with others who have already begun the transition home after war. With Jesus Christ as our focal point it is our desire to provide spiritual and emotional healing through our existing Outpost and Home Front system.”

The Outpost and Home Front structure of Point Man is unique. Outposts are run by veterans and serve as an open forum for members to engage with “others who have walked in their shoes.” The Home Fronts serve family members who have different issues to face when it comes to transitioning from military life, one that can only be understood by those who have played the support role at home.

The real success of the group and others like it lies upon the shoulders of great individuals such as Mike Zorn who has been the Washington State Director and Inland Empire Coordinator for  nearly 17 years. A Vietnam veteran, PTSD sufferer and formerly homeless person himself, Zorn dedicates himself, his time, as well as his own resources to ensure that veterans in the local community get help. This includes traveling over 12,000 miles annually, hosting numerous events and paying $7,000 out of pocket to ensure the ministries’ work continues.

The main event hosted by Point Man Ministries, locally at least, is the annual Memorial Day BBQ. Drawing visitors not just from the local community but as far away as Australia, it has become one of the largest Memorial Day events in the Spokane area, despite its first year attracting only 29 visitors. The event draws in crowds of all kinds. One year a veteran turned long-haul truck driver parked his rig and walked into the event, while another year a music professor came just to listen to the music and had to write to the city council commending the best Bluegrass Country Gospel music he’d heard. Despite large crowds and an emotional feeling, in the 16 years the event has been running there has only been one incident requiring an individual to be escorted from the grounds.

Despite the success of the Memorial Day event, the real work of groups such as Point Man comes in the everyday stories of help and compassion that extend a hand of encouragement to veterans. To this end Zorn and others like him spend every day visiting hospitals, making phone calls, house calls, hosting events, feeding homeless vets, providing counselling for those struggling with PTSD as well as drug and domestic abuse, working with groups such as the Spokane Veterans Court to help end cycles of self destruction and hosting a variety of outdoor, therapeutic outings. Zorn hosts a weekly event at the Rocket Bakery on Garland, meeting with other veterans every Wednesday for a cup of coffee. He also hosts monthly potlucks in addition to the annual Memorial Day BBQ, and hosts events such as “Hunting With Heroes,” where veterans and active duty service members alike have gone on multiple-day pheasant and deer hunting trips.

Even with his focus on serving the veteran community, though, Zorn has to keep a watch on the expenses involved in running the ministry.

“We’re totally non-profit, we don’t even get paid a wage. Last year we started the year with $22 in the account and ended it with about $100, so I guess we did pretty good,” he said.

With $780 monthly in bills the group struggles to keep functioning. Donations are the only thing keeping the group running, and last year’s totals were around $7,000 short. To make a one-time donation, a repeating donation or to learn other ways you can help out, contact Zorn at (509)-994-7177.

Justin Felts was born in Sandpoint, Idaho and has spent most of his life in the Pacific Northwest. Very fond of travelling, he has visited
20 U.S. states as well as four foreign countries. Currently majoring in Anthropology with minors in both Journalism and Religious
Studies at Eastern Washington University, Justin spends his free time reading, playing video games, and dabbling in photography.

Previous St. Marks sings in Lent with Fat Tuesday Jazz Mass
Next Ask a Muslim: Why can’t the Quran touch the ground?