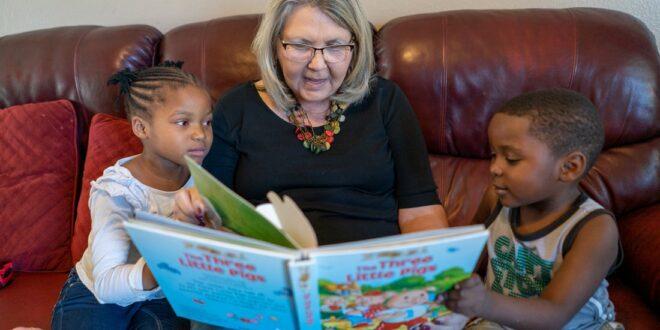 "It's an exciting day when one of our refugee youth tutoring students proudly shows their tutor their 'Student of the Month' certificate and their report card with straight A's," said Jamie Trudgeon, IRC Spokane's youth program coordinator. "As a tutor, it feels really special when a child is so happy about their progress and wants to share that moment with you." In image, an IRC Youth Tutoring Volunteer from another U.S. city office, reading to her students. / Photo contributed by IRC

Imagine a situation where a family of five finds themselves added to the more than 100 million people (1.2% of the global population) who have had to flee or were forced to migrate from the only home they knew. Of that statistic, most of them are internally displaced within their own countries or live inside camps in bordering countries, sometimes for decades.

But this family happened to be a part of the 32.5 million people given a refugee status designation from the United Nations Refugee Agency (UNHCR) and find themselves eligible to come to another country for better opportunities. But most refugees don’t make that far. Fortunately for this family, they are included in the “tiny fraction” of those given the opportunity to start again in a third party country.

This family represents many of the 100 refugees Spokane’s new International Rescue Committee office (IRC Spokane) has helped relocate since they opened their doors in spring of 2022. They serve refugees, asylum seekers and humanitarian parolees. Families and individuals served from this office have come from Syria, Guatemala, Myanmar and Vietnam. In the next few weeks, they will be serving Ethiopian and Congolese clients.

“I think sometimes [people] think they’re all coming to the U.S., but they’re not,” said Kimmie Curry, IRC Spokane’s community engagement coordinator. “We have the capacity to take more and there’s such a need. And I think that there’s also a lot of willingness in the community to wrap their arms around these individuals and help support them.”

Spokane’s IRC location had been in the works for a while, says Curry, and is the second office in the state, Seattle’s long-standing office the other one. Washington ranks within the top 10 states, of 46, who resettled refugees in 2021, according to a UNHCR report.

Because refugee work is fully-dependent on presidential administrations’ refugee admission allotment and the funding that goes with it, explained Curry, opening a Spokane office took some time to come to fruition.

That all changed in the beginning of 2022.

“We just hit the ground running [April 1] because it was still in the middle of the Afghan crisis preceding the Ukraine crisis,” said Curry.

A week later they picked up their first client family at the airport. They came from Syria.

“A lot of people who haven’t met refugees don’t necessarily understand the benefit they bring to the community,” said Curry. “One of the first things we say [to new arrivals] is ‘We are so lucky to have you here. We value your culture, your experiences, your talents, and we feel really grateful that you’re bringing those to us in our community in Spokane and enriching it.’”

From getting their new home set up to walking them through the bus system, from coordinating their health care needs to helping them get a job and from teaching them what to expect from America’s education system to going into their new homes to teach women and children English, the IRC Spokane office offers these individuals several wrap-a-round services that help them get settled into their new lives.

Volunteer Marika Brown, who Curry calls their “internet angel,” has been assisting refugees in their resettlements for about nine months in various roles and finds the work IRC Spokane does “life changing” for the clients but also challenging for them as well.

“The biggest challenges are the barriers that are built into all the other systems,” said Brown, referring mainly to her work setting up internet for her clients. She says they do this through Xfinity’s Internet Essentials program — because of its affordability — and the process can be a long, tedious and confusing. “To imagine that these families would need to figure this out on their own had they not [had] the resources from the IRC is mind boggling.”

For these and other reasons, volunteers and interns are integral to running an IRC office, according to the Spokane website.

Presently, the IRC Spokane office has 30 volunteers, three interns and 14 staff, and these numbers continue to grow as they meet the needs of their increasing list of clients and other immigrants and refugees in the community, says Curry.

While there are several volunteer opportunities within IRC Spokane, the Youth Tutoring Program has the greatest need for volunteers, according to Jamie Trudgeon, IRC Spokane’s youth program coordinator.

Currently, 283 refugee and immigrant students who need help with English learning and educational support are on a referral list compiled by the Spokane Public School District. The IRC Spokane office is the only refugee support agency that provides tutor volunteers to go into these students homes with this academic support, which is provided without charge.

Students who qualify to be in this program experience many gaps in their education, says Trudgeon. This could be from lack of education, no access to education in a resettlement camp or interrupted educations.

“Spokane Public Schools has a really great deal of resources available for refugee students and for English language learners in general,” said Trudgeon. “But it’s still not enough to meet the individual need for students.”

The IRC Spokane office has been able to fill in some of those gaps — so far, with eight of their 30 volunteers tutoring 18 students.

Gratitude is expressed by clients and volunteers, but more community education is necessary to meet even more refugees’ needs, explains volunteer

Families who have been helped by the Youth Tutoring program express gratitude, saying they have seen huge improvements in their children.

“They are able to speak to their teachers with an interpreter,” reports one family member. Another says, “My children always enjoy the time. They have fun and are getting better.”

Clients are not the only ones experiencing gratitude and growth through IRC’s local work.

“Hands down, the most fulfilling thing is anything that makes the clients feel happy — they’re just unbelievably grateful and appreciative of everything that we do,” said Brown. “I have worked with refugees who were combat pilots back at home, and then move here as refugees. I’m helping them apply for stocking positions or labor positions because that’s all they can do here. And yet, they understand that based on life back at home, this is still the better alternative. And it’s a very humbling experience to see how hardworking these people are.”

If people in the community want to learn more, says Brown, the biggest thing they can do is get educated about refugees and what it’s like to resettle in Spokane or anywhere else in the world.

“There’s many people that just have no idea, the need of refugees, and what that looks like,” said Brown.

She thinks following IRC Spokane’s Facebook page or reading about their experiences and resettlement needs on IRC’s Spokane website would be a great start and maybe encourage more to volunteer.

“I think that would make a huge difference,” Brown said.

Previous The Evil in This World: Is It Evil to Lie?
Next Brief: Spokane Public Library to host exclusive screening of “The Abortion Talks”