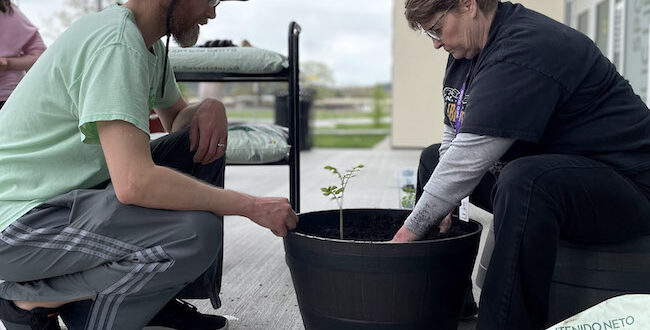 On the surface, Growing Neighbors is a collaboration between local faith and non-faith based organizations to provide fresh, healthy and locally-grown food to individuals and families who don’t have access to such produce otherwise.

Go below the surface to its roots, Growing Neighbors is about just that — growth. Growing individuals towards self-sustaining practices while also nurturing establishment of a community who care and support each other, putting their faith and beliefs into practice.

Growing Neighbors began at Shadle Park Presbyterian Church in 2016 — but it didn’t spring from the idea of just growing food for people in need, Shadle Family Ministry Director and Director of Growing Neighbors John Edmondson said. While a “garden ministry” had been created about three years earlier at the church’s youth ministry house next door on Rowan Avenue, there were other suggestions for employing their faith in the community from other church members.

There were also interests in being more hospitable, of reducing waste and being more environmentally conscious. The concept of feeding people kept coming up, and the coupling of these other interests with the gardening ministry seemed to resonate and make sense, Edmondson explained.

“This seems like a real thing we need to be more intentional about what we do,” Edmondson said. “Really put our faith into practice in practical ways. It was about reaching out to them (people outside the church) where they live rather than get them to come in (to church).”

Church members began volunteering in many ways — contributing produce from existing gardens, donating lawn space to create new gardens and time and skills to teach the art. Northwest Harvest was one of the first organizations to partner with the new movement, donating seeds and plant starts.

Growing Neighbors began utilizing local farmers markets, such as the Emerson Garfield Neighborhood Farmers Market on North Monroe, to help increase access to the produce. They also teamed with area food banks such as Northwest Harvest and Caritas to augment the locally-grown produce with other food stuffs.

The pantries provided an avenue for people who didn’t have the means to travel to food banks regularly to access food quickly — something that proved valuable during the Covid-19 pandemic in 2020.

Growing Neighbors also took on another food distribution method during the pandemic — home deliveries. Edmondson said they got involved in this pilot program through their relationship with the Spokane Food Security Coalition, also helping those who didn’t qualify for food assistance or who had physical challenges getting out to get food.

Funding for the pilot program ran out at the end of 2020 — leaving Growing Neighbors with questions.

“Now what? How do we move on?” Edmondson said.

Edmondson said he had a vision for continuing the program through using bicycles as well as cars — an idea keeping with Growing Neighbors environmentally-responsible theme. Using a list of individuals and families receiving food through the Coalition program, along with lists from area food banks, the organization began making its own deliveries — providing not only food but seeds and plant starts to help participants get their own gardens going.

As Growing Neighbors food distribution means have grown, so has participation. Edmondson said there are now over 60 different growing spaces throughout the county — about half within a couple miles of Shadle Park Presbyterian Church.

Growing Neighbors has a booth at four farmers markets in Spokane. Many food vendors utilize food access programs such as SNAP/EBT, SNAP Market Match and the Farmers Market Nutrition Program for both WIC and seniors to assist food purchases.

Assisted by some funding from Northwest Harvest, Edmondson said they have put in at least 30 Little Free Pantries over the past year and a half. They are also involved in making food deliveries in seven neighborhoods in Spokane and Spokane Valley, and regularly hold classes and camps on gardening and cooking with fresh produce.

Several Spokane Public Library branches have joined with Growing Neighbors on gardening instruction, along with the Northeast Community Center in Hillyard. Edmondson said the center already had some good food programs underway, and is exploring the idea of growing food on its property.

Other organizations have partnered with Growing Neighbors — one of the latest being Knox Presbyterian Church in the Emerson Garfield Neighborhood. Knox pastor Drew Peterson said the church decided to put in the garden a little over a year ago after hearing Edmondson’s presentation on Growing Neighbors and Peterson’s corresponding sermon at a service.

The service resonated with four Knox members, who subsequently approached the church’s committee responsible for facilities. Two of the individuals were new to Knox — and within two weeks of their request, part of the church’s front courtyard was being filled in with soil.

“That was their (new members) way of connecting with the church at that time,” Peterson said.

Peterson said this year they applied for a small grant through the Presbytery of the Inland Northwest to do food distribution in the neighborhood. The grant helped provide a small stipend for an intern to provide program coordination, and the church utilized a partnership with Side by Side Ministries for volunteers.

According to its website, Spokane’s Side by Side offers “several programs and gatherings, each of which is designed to bring people both with and without intellectual/developmental disabilities together, to build friendships.” Director of Operations Janet Neder said they are excited to join the partnership with both Knox and Growing Neighbors.

“It would be really cool if this leads to more partnerships,” she said. “We all care deeply about relationships.”

“We’re not trying to put our name on any of this,” Peterson said. “It’s about being involved in the local community.”

Peterson said statistics indicate there are over 300,000 churches in the United States, and about 85% of them are declining in membership. Many have turned inward and lost connections with the community.

If they are to survive and thrive, Peterson feels churches need to heed the words of Rev. Martin Luther King from his 1964 book “Why We Can’t Wait:” “If today’s church does not recapture the sacrificial spirit of the early church, it will lose its authenticity, forfeit the loyalty of millions, and be dismissed as an irrelevant social club with no meaning for the 20th century.”

“The way to combat this (decline) is to turn outward and serve people in the community,” Peterson said. “People who want to be a part of something usually do so because of what they’re doing.”

It’s that community creation that is at the root of Growing Neighbors. Edmondson said growth of the organization has created new priorities in order to help it continue and thrive — mainly funding and staffing, both of which are needed to help continue the goal of creating “Neighborhood Families.”

“We help point people in the right direction and help them to be good neighbors,” Edmondson said. “We want to be encouragers of community relationships.”

Previous The Difference Between Protestant and Non-Denominational Church
Next Am I Surprised That Belief in God Has Dropped? Nope!