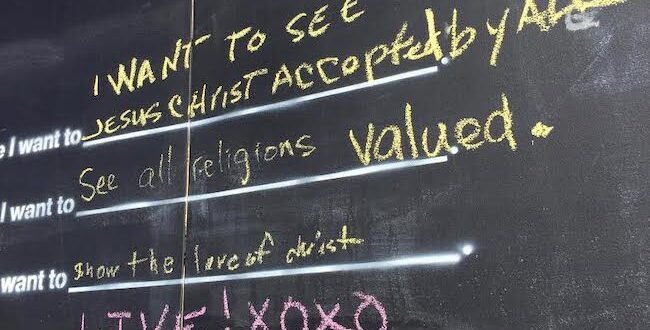 "Before I die" chalkboard at Riverfront Park/Cassy Benefield - SpokaneFāVS

My daughter and I walked about Riverfront Park the other day and we came across a chalk board wall under Riverfront Park’s Pavilion filled with many blank lines that began with, “Before I die I want to ________.”

All manner of things were written in chalk on those blank lines. Lines that could be filled up again and again by new ideas and hopes from different people with varying points of view and belief.

We were eager to take our turn.

I wrote, “Before I die I want to ‘write a book.’” There were several others who wrote the same, and I uncreatively placed my hope beneath a line identical to my own. Still, I got to feel that sense of community in sharing my hope with the “world.”

My daughter’s was so fitting for her age and interests. Before she dies, she wants to meet Ariana Grande. My daughter wants to be a pop star. Last year, she wanted to meet JoJo Siwa. Thankfully, I trust her dreams will continue to change and grow year to year.

Soon after, something amazing took place that connected me to my work and support of Spokane Faith & Values (FāVS), and this is the purpose of my sharing this story.

While I was observing some masked individuals around the wall, I noticed one woman writing that “Before I die I want to ‘see all religions valued.’”

I was struck by her comment because I have come to understand these last two years at FāVS that this is the heart of the work we do through our local non-sectarian religious journalism, our commentaries, our Coffee Talks, the FāVS Center, and so much more.

Through FāVS, I have learned by valuing someone’s faith or non-faith journey, I am, in turn, showing them I value their dignity as a human being, without feeling like I need to diminish my own faith practice.

I decided to approach the “see-all-religions-valued” writer.

I told her how much I liked her comment. Then, I asked her if she had ever heard about FāVS. She had not but was open to hearing more. So, as if to test our mission and work, she was curious and asked me how our posture was toward atheists.

I was delighted by this question because it’s a very good one. I have learned through FāVS that atheists often feel stigmatized among people of faith. I told her we at FāVS try to value atheistic beliefs and that we include an “Ask an Atheist” column on our website.

She was impressed and looked up our website on her phone right there and let me know she would look further into our work.

It was such a powerful “chance” connection.

But it didn’t stop there.

Just then, it dawned on me why she may have written and placed her comment there—to possibly contrast it with what the individuals above and below her wrote. Although I don’t know for sure, I didn’t get the impression she was being disrespectful but that she was trying to show value and respect toward others’ beliefs and non-beliefs.

Arguably the lines above and below hers are ones that deeply resonate with me and are sentiments I find true. What was interesting, though, in this realization, was the understanding that my faith and my belief did not diminish what she expressed nor did her statement diminish the hopes expressed around it.

This is what FāVS has taught me.

In other words, FāVS is a community—a community “marketplace” of religious ideas, if you will—where individuals can discuss all manner of thought and belief, while being fully committed to their own faith or non-faith journeys.

And in this safe space together, we learn from one another, agree and disagree respectfully with one another (more often than not, agreeably), and appreciate and value the dignity of one another’s spiritual or non-spiritual journey—all the while remaining true to our beliefs and convictions.

For me, FāVS is a space where I can practice my faith beautifully, through loving God as I believe Him to be in the God-man Jesus Christ, while at the same time, loving and valuing my neighbors in their respective journeys exactly where they are.

In my faith tradition, there is no greater commandment for me than this.

www.underhisshadow.blogspot.com
Previous Report: People who are highly spiritual tend to be more civic-minded
Next POEM: 40 Days More, and Nineveh is Overthrown