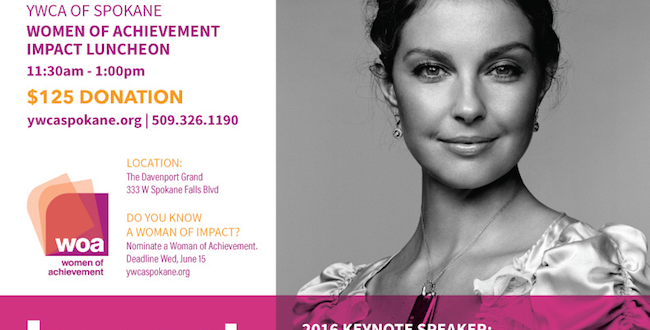 This Fall Spokane’s YWCA will hold its annual Women of Achievement Impact Luncheon to honor a woman from the Spokane area for their work at making an important impact in society.

This year’s Woman of Achievement has not yet been selected and is open for nominations. Nomination submissions are due by July 11 and can be made online. The Impact Luncheon will be held on Oct. 7.

Nominees for the Woman of Achievement Award are expected to have demonstrated leadership in arts, culture, business, industry, racial and social justice, community enhancement, education, science, technology and environment.

This year’s keynote speaker is Ashley Judd. Judd is a humanitarian that has spoken on the impacts of coal mining and youth with AIDS.

“Ashley Judd has given a voice to the voiceless, raising awareness and making change,” Regina Malveaux, chief executive officer of YWCA of Spokane said in a press release.

Those who are interested are asked to RSVP online. Prices for the luncheon vary depending on tables.

Previous Ask An Atheist: Would the world be better off without religion?
Next The Place of Visual Arts in Interfaith Bridge Building