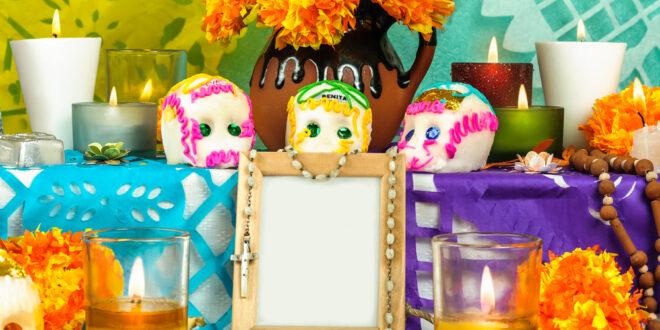 Few people may think of it as such, but historically, the Halloween season — which includes the religious observances All Souls’ Day, All Saints’ Day and the Day of the Dead — is less about the undead from Transylvania and more about undergoing transformation.

From long, warm summer days into long, cold winter nights, the transition from being alive to being dead or someone becoming a flesh-eating zombie by putting on a costume and mask, the time of Oct. 30 – Nov. 5 is about changes.

It’s a period where those changes are celebrated in one way or another. One of those is the Day of the Dead festival — and the public is invited to Spokane Unity Spiritual Center’s first ever such service this Sunday, Oct. 30.

The service — which begins at 10 a.m. at the Center located at 2900 S. Bernard St. — will blend festive music and some traditional Day of the Dead decorations and devotions with presentations on history and ancestry.

“The intent is to talk about the joy of being alive,” Unity Spiritual Center Spiritual Leader Rev. Bonnie Barnard said. “We want to connect joyously with the people we’ve lost and tell each other about it.”

The original Day of the Dead holiday — celebrated Nov. 1 – 2 in its native Mexico — springs from similar themes as its European counterparts, All Souls’ Day and All Saints’ Day, but with some pre-Spanish influences from the ancient Aztec Empire blended with New World culture. All of these holidays have their roots in the ancient Celtic New Year’s festival of Samhain (pronounced Soo-when, So-ween or Saw-wen), which means “summer’s end” and marked the close of harvest season and the coming of winter.

It was also a time when the Celts believed the veil between the worlds of the living and the dead was at its thinnest, which would allow the dead to return to the world of the living or those who were recently deceased but had yet to move on to do so. The memories of the latter were honored and the presence of the former celebrated and welcomed.

Like many other pagan festivals, rituals and symbols, Samhain was Christianized early in the first millennia and thus allowed through time to be mixed with other seasonal traditions to eventually become Halloween. Europeans borrowed more of the solemn religious traditions to honor departed souls and saints, and when they colonized the Americas, leaders in Mexico co-opted this and blended it with indigenous practices.

“Unity is co-opting this and putting our own little twist on it,” Barnard said.

The traditional two-day festival involves lots of food and drink of various types, brightly decorated cemeteries, gravesites and homes, celebratory processions, music and even special poems to honor and memorialized the deceased. Unity plans to employ some of that in its Oct. 30 service that is focused not only on remembering departed loved ones but also an exploration of ancestry and immortality and what that might mean with regards to individual transformation.

The Center will be decorated with bright colors and designs, including the use of the traditional Day of the Dead flower the marigold. There will also be altars — ofrendas — at which family members can place photos, slips of paper and other items remembering departed loved ones, including pets.

Traditionally, these altars included favorite foods and beverages of the departed as well as memorabilia. The intent was to encourage the souls of the departed to visit the living so they would be able to hear the prayers and words directed to them.

Music at the service will be provided by three local musicians and Mariachi Imperio Real — a mariachi band based in Wenatchee. Those attending will be invited to sing as well, with the service concluding with the song “Remember Me” from the Disney movie “Coco.”

In between the music will be “three chunks of talking,” Barnard said. That opens with a history of the Day of the Dead celebration, followed by a discussion on ancestry — an important aspect of biblical teaching — and concluding with a discussion about immortality and its importance in the Unity Church.

Barnard, who recently began as spiritual leader in Spokane, officiated Day of the Dead services while serving at a spiritual center in Scottsdale, Arizona. It was always one of the most favorite services of the year, she said, and she decided such an observance should be started in Spokane, helping to get an organizing committee up and running.

Barnard said an experience during COVID-19 further inspired her to continue Day of the Dead observances. She spent six months at a hotel in Mazatlán while undergoing some medical procedures and was virtually the only guest in the hotel due to travel restrictions.

She connected with hotel staff and others during this time, and learned more about traditional Day of the Dead observances — including being taken to see gaily-decorated cemeteries and gravesites where “homes” had been built for the deceased by their families.

“We don’t do that very much as Americans,” she said of remembering ancestors.

Through Sunday’s service, Barnard said she hopes people will come to appreciate the importance of lineage and understand that “God is everywhere present.”

“We always have our doors open to everyone,” she added.

Previous Local Pastor Running for Spokane County Commissioner
Next Poem: Fountain of Being, Fountain of God