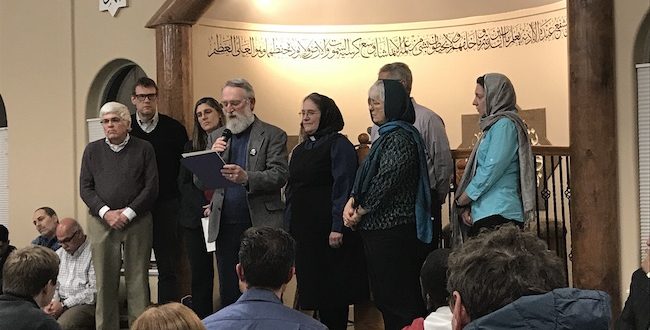 Spokane stands in solidarity with Muslim community after Christchurch massacre

On Friday night residents from a variety of faiths spilled into the Spokane Islamic Center for a brief service to show they stand in solidarity with the Muslim community after an attack on two mosques in Christchurch, New Zealand killed 50 people.

Mamdouh El-Aarag of the Islamic Center said the mosque has received phone calls, emails, cards, flowers and has had numerous visitors since the New Zealand attack. He said the support from the community hasn’t gone unnoticed and thanked the guests – so many they sat in chairs, on the floor and leaned against the walls – for coming.

The gathering took place just five months after a similar service was held at Temple Beth Shalom in response to the shooting at a Pittsburgh synagogue.

He said people of all faiths need to stand in solidarity with Muslims in New Zealand who are reeling from the attacks.

“It’s our religious and moral obligation to extend a helping hand to our brothers and sisters at this time of need,” he said. “They are us. We should no longer look at anyone else as a ‘they’ but rather look at all of us as an ‘us.’”

Referring to Scripture in the Quran, El-Aarag explained that people come from the same origin — Adam and Eve — and are therefore brothers and sisters in humanity.

“God in his infinite wisdom made us in different colors, different cultures, and gave us different languages so that we  could come to know one another so we can be stronger together, not so that we can fight each other and certainly not kill each other,” he said.

Police officers stood guard outside the Islamic Center before and during the service. Sheriff Ozzie Knezovich also kept watch from the back of the room, but made his way to the front midway through the service to voice his concern over radicalized hate.

He said a house of worship — no matter what religion — should be, “the safest place on Earth” because it’s where God lives, as well as peace, understanding and kindness.

“One too many times I’ve stepped into a house of worship after a tragic event. When are we going to stop this?,” he asked. “We have the capacity to love one another and do the right thing and teach our children that this is not what God intended.”

He said the hate ends the day people stop pointing fingers at one another.

A statement from the Faith Leaders and Leaders of Consciousness echoed his sentiments, “Love for every human being will triumph over hate.”

Iris Berenstein, a member of Temple Beth Shalom, said it’s hard to grasp the lack of peace in the world, but said events like the one last year at the synagogue and the one Friday night at the mosque are healing.

“We need to mourn together,” she said. “The unity that we see here is what will help us to overcome.”

If everyone who reads and appreciates FāVS, helps fund it, we can provide more community news like this. For as little as $5, you can support FāVS – and it only takes a minute. Thank you.