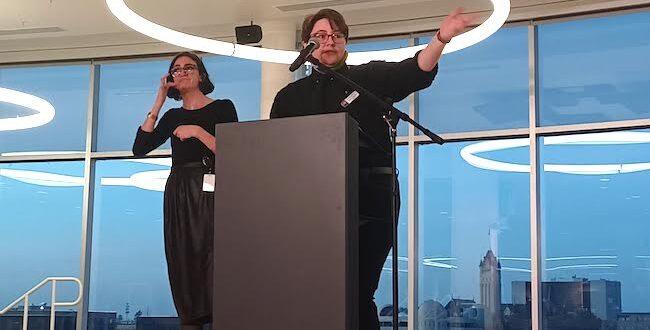 Update: This story has been updated to correct a quote by Nanette Josephine Cloud. We regret the error.

The event was organized by Odyssey Youth Movement, Spectrum and the Spokane Public Library and featured speakers as well as resources for the trans community. More than 80 people gathered in nxʷyxʷyetkʷ Hall to commemorate local and national trans people whose lives ended as a result of violence and societal pressures.

Katie Thew, 22, was an alum of Odyssey Youth Movement, a safe space for LGBTQIA+ young people located in the Perry District on Spokane’s lower South Hill. Thew graduated from St. George’s, and studied psychology at the University of Redlands in California before they ended their life in early October.

Justice Sun, an advocate for houseless youth, spent time unhoused on the streets of Spokane and was in the child welfare system. They planned to become an attorney and continue their fight for equity in courtrooms and through policy-making.

In March of 2020, Sun wrote, “my biggest driver for advocating has been to improve the quality of services for youth and families that depend on the system. My long-term goal is to become an attorney…I work as a consultant today because I cannot wait until I earn my J.D. through law school to stand up for youth and young adults – like TeamChild did for me.”

Their life also ended this year.

Thew and Sun were remembered alongside others beyond the Spokane region. Many of those remembered were disproportionately BIPOC. Speaker Nanette Josephine Cloud reminded those in attendance that individuals at the intersection of race and gender are often targets of hate.

Chandler Wheeler, the communications coordinator for Odyssey Youth Movement and the master of ceremonies for the event, quoted the Human Rights Campaign Foundation saying, “the intersections of racism, sexism, homophobia, biphobia, transphobia and unchecked access to guns conspire to deprive [trans BIPOC] of employment, housing, healthcare and other necessities.”

Luke Grayson read a personal statement that embraced the experience of grief, not only grief for those who are lost by violence but also the grief that so many trans people feel when they are misunderstood or estranged from family. He also touched on his own mother’s grief at the loss of her expectations; expectations that included white bridal gowns and biological grandchildren.

Ash Montenegro-Hart wrote a poem that reverberated with their Indigenous Mexican American heritage and worldview. They read aloud:

For this body, this spirit, are nothing new.

I have existed for centuries

and will be here for many more.

They turned the mic over to Gus Dinsmore who spoke of their grief for those who cannot be themselves. Dinsmore offered words of encouragement and support to the audience, saying that they have “faith for what is good…and I believe in good.”

Artemis Meadows shared the words a now-deceased friend once offered her. “Don’t live your life for someone else’s dreams,” she told the gathering, offering a sense of escape from the tension some trans people feel when they do not meet their loved ones expectations.

Fig DePaolo delved into matters of faith and autonomy in a poem. They read, “God, it is good to hypothesize you on bridges and under them/my life’s work to figure you out.”

Figuring out Faith and Space

The Rev. Bob Feeny of Westminster Congregational Church of Christ in downtown Spokane sees his work as figuring out “what the queer and trans experience tells us about God’s creation,” he said.

Feeny went on to explain that “all creation bears the image of God” and the queer experience can show cisgender individuals like himself other ways of being, communing and living as part of God’s creation.

Feeny acknowledges that not all trans people have had positive experiences with organized religions or other forms of spirituality. He has found that trans people come to church in order to seek meaning beyond day-to-day material concerns. Feeny believes LGBTQIA+ individuals come to church to explore answers to what theologians call the “ultimate concern.”

Feeny explained that the investigation of deep concerns requires a sanctuary, a place of refuge and safety. Yet, trans individuals recount entering places of worship with trauma only to find themselves traumatized anew. They might be welcomed to churches or congregations, but are later told that they cannot serve in ministry or on councils, he said. Feeny said that this isn’t the case at Westminster. Westminster is part of ONA, the Open and Affirming Coalition of the United Church of Christ. Westminster’s church features pride flags as part of what their website calls, “an extravagant welcome.”

However, trans individuals like Cloud are at times skeptical when organizations claim openness and inclusion. Cloud turns the idea of inclusion upside down when they say, “You are lucky to be included by us.”

She went on to assert how open the trans community is to cisgender individuals. She continued to shift perspectives when she said that trans people, “are sacred and deserving of worship, yet we are barely offered acceptance.”

Less than 24 hours after Spokane’s Transgender Day of Remembrance, a violent attack occurred at Club Q, an LGBTQIA + nightclub in Colorado Springs. In light of this violence, Cloud’s final words to event attendees provide a necessary call to action and strong encouragement.

“Create refuge. Offer opportunities. Everything you do is valuable,” she said.

Previous ‘Black Panther: Wakanda Forever’ Argues You Need Religion For Grief
Next Can We Heal Our Divisive Politics?