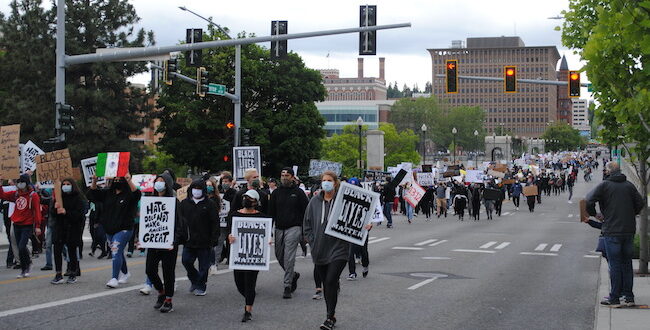 Mass protests following the death of George Floyd in late May have led to the rebirth of the Spokane Protest Chaplains.

The Protest Chaplains were first formed in Boston during the 2011 Occupy Wall Street movement — clergy members would take to the streets to show solidarity and offer support to the protestors.

The Revs. Deb Conklin and Jim CastroLang were both a part of the original Spokane Protest Chaplains group that formed in 2011 to support Occupy protests happening in Spokane.

“I can sure remember back [during Occupy] kind of going on some of the marches and wearing stoles and clerical collar and things like that to be a visible presence during that time,” CastroLang, a United Church of Christ pastor said.

He noted that the work of the protest chaplains was particularly visible during the 2017 neo-nazi march in Charlotesville where clergy members organized an interfaith service the night before the march and then showed up at the march to lock arms and act as a buffer protecting the peaceful counter-protestors.

Conklin, a Methodist pastor, said that after Occupy, the protest chaplains in Spokane went dormant but were reawakened when the Black Lives Matter demonstrations arrived in Spokane in early June.

“The thought was, if we clergy wore, ya know, symbols of our office — for some of us that would be an alb and a stole, for some it would be a clerical collar, various visible symbols of our status — if we were to wander around in small groups downtown that could be a calming presence, rather than the escalating presence of these paramilitary looking people,” Conklin said.

Conklin emphasized that in absence of frequent protests, local clergy members are organizing and collaborating with Black clergy in order to discern the next step forward.

“Rather than us (the protest chaplains) presuming what needs to happen, since the overwhelming focus of this is Black Lives Matter and racial justice, what can we do? How can [we leverage our white clergy privilege] in a way that would be helpful?,” Conklin said.

Their mission is simple, according to CastroLang.

“It comes out of a desire of religious leaders to say,  ‘we can’t sit on the sidelines during this time’,” he said.

“It’s just like in a church when you’re a pastor  and you wanna’ be pastorally present to somebody when they need you — either they’re sick or they’re having a crisis of some sort — but in order to be present you have to have a kind of relationship with them where they want you there. You also have to know that they need you, and then you need to say ‘hey, can I sit with you, listen to you, etc..?,” CastroLang said.

Both Conklin and CastroLang underscored that the Spokane protest chaplains are still in the beginning phases of reviving the group, but are planning to have members ready to respond in any upcoming demonstrations.

Previous Ask A Catholic: Do Sacraments Work?
Next The Hypocrisy of Jerry Falwell Jr.