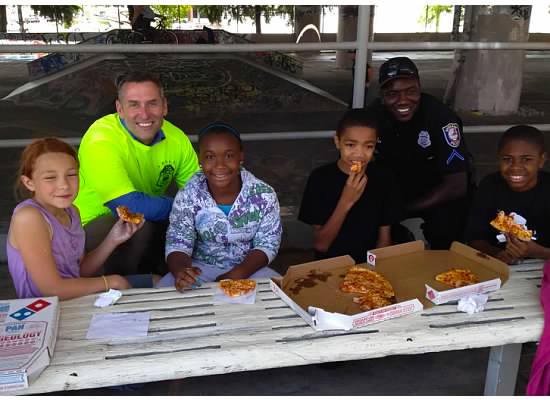 It was 12 p.m. on July 2, and the 98-degree heat radiated off the asphalt basketball court in Liberty Park. Pastor Tommy Williams, wearing a neon yellow shirt labeled “COACH” blew a whistle.

“I need the following players at the table: Lacey, Levi Bob and Theresa,” he said.

Williams, executive director of Operation Healthy Family, handed out red and blue jerseys with S.P.Y.A.L. on them to the players. Chaos reigned on the small court as more than 50 children, their parents and police officers mingled in the heat, trying to get players coordinated for the first match between the OHF Ballers and the Swagtastic.

SPYAL, or Spokane Police Youth Athletic League, is a 10-week neighborhood basketball league designed to build rapport between police officers and at-risk youth. The league is the brainchild of Pastor Shon Davis, Officer Jennifer DeRuwe, Chief Frank Straub and several other local community leaders and police officers. Davis grew up near gang activity in Los Angeles, and when he moved to Spokane he saw many of the same influences on local children. He and other pastors thought it was important to start fixing things, and start young. They approached Straub to discuss a solution.

DeRuwe said kids in neighborhoods like the one near Liberty Park don’t have good memories of police officers. Many of their older siblings are in gangs, and their families often live in poverty. Their only relationships with police officers are often built on fear and mistrust, and she wants to change that.

“I want kids to remember that personal relationship, like ‘I hung out with that guy,’ or, ‘I played basketball with her at the park every week’,” she said. “Instead of ‘[the police] showed up to arrest their parents.”

Basketball seemed like an engaging, low-cost way to get to know local kids, DeRuwe said. Since the league started up immediately after Hoopfest, it seemed like a natural transition into a popular sport. Still, the officers weren’t sure how many would attend.

The response was overwhelming. Organizers expected 32 kids at most, and almost twice that showed up for the first game, according to Lydia Taylor, Spokane Police public information officer.

The season began with a kickoff event June 25 at Spokane’s skate park, where kids painted over graffiti for an hour to get free basketball gear and jerseys, Taylor said. The turnout there was big, but today’s event is drawing a bigger crowd, which is promising for the future of this donation-run pilot program.

“Our goal is to bring this to other neighborhoods, and perhaps other sports,” Taylor said.

Each team has one police officer and one community leader (usually one of the pastors) participating, as well as boys and girls. In addition to building positive relationships with the officers, DeRuwe sees it as a good way to connect families with potential local service providers in their area that they might have been unaware of.

“Working with the community leaders connects the kids with needed resources,” she said.

SPYAL games are on Tuesdays at noon, and the program includes weekly basketball practice on Thursdays. The final game of the season is scheduled for Aug. 29.

Previous What we can learn from zombies
Next For some converts, Ramadan is the loneliest time of year