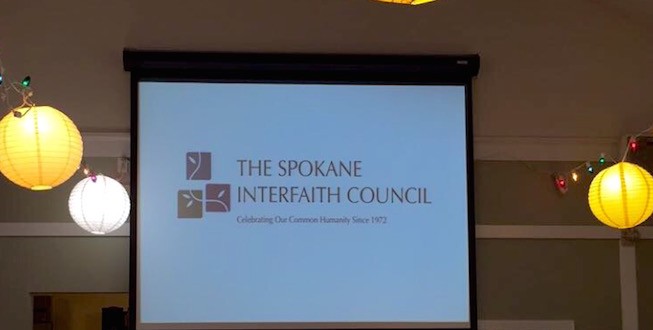 The Spokane Interfaith Council held its 43rd annual membership meeting this week. The meeting was held at the West Central Episcopal Mission in order to hold board elections and discuss what members wanted to focus on in the upcoming year.

The Council, whose mission is to “celebrate the depth and wisdom of spiritual diversity and support understanding among all ages and faiths to build a better community,” has been around since 1972.

“I believe that we should go one step further. It’s not enough in today’s world to just talk about our problems; we need to be actively working to engage others, and to find local solutions to local problems. That is what the Spokane Interfaith Council is all about,” Oberst said.

The agenda for the meeting included reports from Oberst and treasurer Doug Huigan, an update on the Council’s social media and small group discussions.

Oberst reported that over the last six months the Council has increased board productivity, revamped their media and marketing techniques, reassessed priorities and visions and began seeking community partners.

The meeting closed with the elections of four new board members: Jeremiah Johnson, Morgan Schmidt, Laurel Schaeffer, and the Episcopal Mission’s minister Kris Christenson. After nomination the four briefly spoke to their qualifications and what they thought they could contribute to the board. All four were approved after being seconded by another member.

The Council is currently in a transitional period after being on the decline for the past few years.

“We are hoping to reinvigorate the Interfaith Council and get it to where it needs to be in the community. We all recognize there are problems in our city and we want to be a part of facilitating discussion and be a part of intentional action towards bringing people together,” Oberst said.

The Council is looking to add more members of all ages and faiths who want to break down barriers and serve in the community. Any board member can be nominated and voted for, for a yearly position on the board.

The Spokane Interfaith Council can be reached via its website, or on Facebook, Instagram, and on Twitter at the handle @SpokaneIFC. Oberst says a calendar will be up on their website soon and that he encourages anyone who is interested to come out to any of the events. Also, any of the board members can be reached via email at the Council website.

Their next monthly meeting will take place on May 19 at the Kress Gallery in Riverpark Square.

Oberst says at this meeting the Council “will be talking about a few things we all kind of chatted about in the breakout session. …There are so many people that are doing good work and we don’t want to take their place or compete with them, we want to uplift what’s working. We want to be intentionally acting on things that people haven’t.”