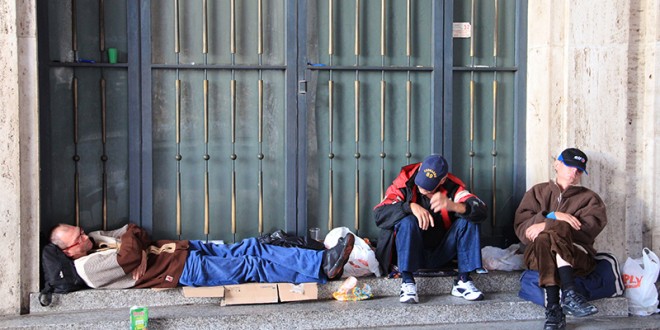 (RNS2-nov13) A group of homeless men sleep just outside of St. Peter's Square at the Vatican on Thursday (Nov. 13, 2014). For use with RNS-HOMELESS-SHOWERS, transmitted on November 13, 2014, Religion News Service photo by Josephine McKenna.

This week the City of Spokane announced that the number persons and families experiencing homelessness shows a slight decrease in from the last year, for the second consecutive year. The annual, one-night count took place on Jan. 28 in Spokane as well as across the state.

Previous Indian sex trafficking film is a “story that needs to be told”
Next Well-written book reports on Iraq’s history, culture, politics

In my personal opinion, this annual survey is a shell game and does not accurately represent what is going on with the homeless community in Spokane. The late-night homeless outreach group that I started didn’t even participate in collecting information for the annual point in time count this year. The numbers of people we saw on the street this winter season increased from last year and that was even with more people being pushed out of the downtown core and into hiding in the less populated and monitored areas. And also with more people utilizing the warming shelter when it was open. Apparently the wishful thinking of the downtown business community and leadership who don’t want the homeless to be seen or heard is becoming their reality as they increase efforts to criminalize homelessness, eliminate their spaces, and become more invasive with their official business. Ever taken a look at the questions on the Point in Time survey? They now want to know a person’s full name, age, gender and sexual orientation, income and income sources, among a whole slew of other invasive questions. It used to be anonymous. Not anymore. Tell me truthfully, would you give out that kind of personal information to a complete stranger just because they asked you? Not to mention the survey is several pages long and is printed on dark colored paper which makes it almost impossible to read or fill out in the dark at night. The numbers collected with this annual count are unreliable and should not be used to make policy or by the City to pat itself on the back.

Furthermore, the count gets misrepresented as a single point-in-time count. In reality the count takes place over a week or two and then is compiled by the City as a single date. In this forum I can barely begin to describe how inaccurate and unreliable this information is. And I believe it’s part of a larger campaign to misdirect people and imply that action taken by the City is helping the homeless in Spokane. What it really does is obfuscate dwindling services for the homeless, the effects of cruel anti-homeless laws and no-rest laws like the no sit/lie ordinance and anti-transient paraphernalia laws, and increase pressure on the few remaining public services and spaces like the downtown library. Meanwhile inaccurate signs go up downtown and on buses targeting people for lack of hygiene and implying that homeless people have places to go to for services such as showers, when those places have closed their doors. Did you know that instead of writing sit/lie as the violation on the arrest citation, police are writing trespass instead? Or that they don’t bother logging in the arrest so that when people show up to Community Court to deal with the arrest (up to 364 days in jail and $5,000 fine!) there is nothing in the system? That’s how the City is able to claim they are not arresting anyone for sit/lie. The numbers that are pushed around on desks and fed to the media simply have no resemblance to reality.