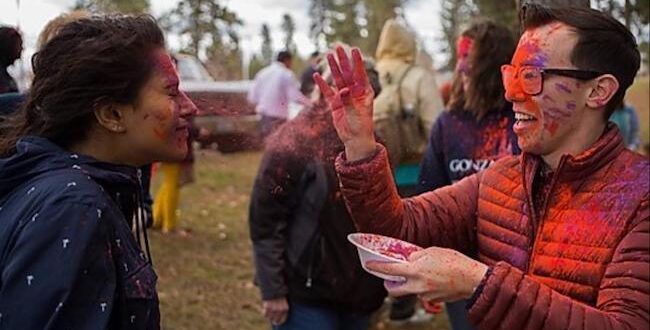 The Hindu celebration of Holi, or Festival of Colors, features people painting each other with bright colors. Credit Courtesy of Himani Agrawal

Himani Agrawal says the Holi festival is based on a legend.

“There was a very cruel king and he was very powerful and he was merciless. He was really bad for his people and he didn’t care about anyone. And he was so powerful that he started thinking he was the God,” Agrawal said.

This man had a son whose views were much different than his father’s. The father gets angry.

“He just wanted him dead because, he thought, ‘I am the God and if he cannot accept me as a God then he don’t have a right to live.’ He tries to kill him and then God comes and saves him, he saves everyone, he saves humanity,” Agrawal said.

That’s one of several stories associated with Holi. Though it’s a traditional celebration, she says it has changed over the years.

“It is more now like a fun festival. Holi is a two-day festival. The first day is on the Full Moon day. They do a bon fire. People circle around that and they pray to get rid of all the negativity. It gets burned and only the good things remain,” Agrawal said.

And it has other rituals. She says people act out the legend and do some cultural dances. On the second day, she says people paint each other with bright colors and enjoy Indian food, including a filled, sweet dumpling fried in ghee, or clarified butter.

On Sunday [March 8] the leaders of the Hindu Temple are putting on a miniature version of Holi, two hours rather than two days, 11 a.m. to 1 p.m., at the FāVS Center, 5115 S. Freya. The event is open to the public, but because there’s limited space, registration for the event is closed.

Doug Nadvornick is the program director and news director at Spokane Public Radio and the host of Inland Journal podcast.

Previous Letter To The Editor: Plan Now for the Person You Will Be
Next We’ve heard you outside Planned Parenthood. Now will you listen to me?