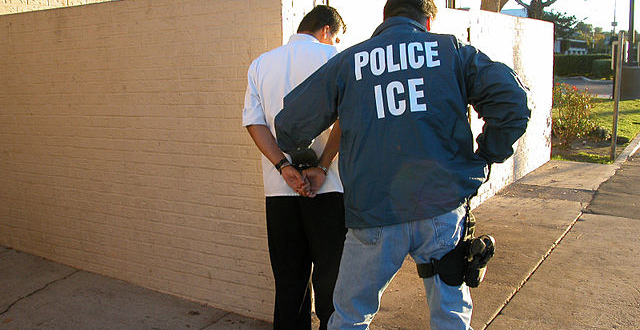 Spokane faith leaders weigh in on immigration and reform

By Brianna Vasquez and Ian Douglas-Leonard

The election of Donald Trump as the 45th President of the United States brought with it more than just the usual pomp and circumstance. Alongside the shift in power came a tidal wave of new policies and executive orders, a large portion of which were aimed at expelling and prohibiting immigrants and refugees from entering or living in the U.S.

This drastic shift in policies has left thousands of people living in the fear of being deported. As a result, even some of the most sacred observances are being abandoned.

The Rev. Liv Larson Andrews of the Salem Lutheran Church in Spokane, shared the story of an El Salvadorian pastor. He immigrated to the U.S. and is now the pastor for a primarily Spanish speaking congregation. The pastor himself is a citizen, but much of his congregation is not.

Since the Trump policies have been implemented, only about a third of the parish attends church on Sundays because they are too afraid of the possibility of deportation. This is just one of the many examples of the anxiety that people are living in with this new drastic change in policy.

For Gonzaga University Chaplain Joyceann Hagen, people not feeling comfortable attending church is just another connection between the issue of immigration and religion.

“I think [religion] has to be deeply involved, because you look at scripture for the Old Testament, they talk about refugees and people needing to be cared for and that is part of who we are as believing people,” Hagen said. “This is a part of our job, our work, our mission, to walk with immigrants and refugees.”

Hagen and Larson Andrews are in the same line of work: faith. The policy changes regarding immigration reflect a specific light on those who are in the line of work to create them, the politicians.

“Policies don’t match up with what [the politicians] are ‘supposed to be about,’” Hagen said of the politicians who sport their religious values, yet support the Trump restrictions.

Local representative Cathy McMorris Rodgers, like many politicians, has been known for touting her religious values and then voting in an opposite direction, an action which both Hagen and Larson Andrews deemed as “hypocritical.”

“We live out our faith in a particular vocation and the vocation as a public leader here is to set policy,” Larson Andrews said. “It’s true for all public leaders to tell the truth and to set policies that are most humane for as many people possible.”

It is the role of leaders to correct falsehood, and right now there is a lot of lying happening. Especially if it is someone saying that they are of Christian faith, telling the truth is a basic.

“Christ calls us to act faithfully even if it causes us loss or unpopularity. So, if any constituents believe anything that isn’t true it is the job of leaders to correct it or to say here what is really happening,” Larson Andrews said.

Larson Andrews is not calling for the government to follow religious guidelines, but urges those in charge to use compassion.

“I value separation of Church and State and the things we value as followers of Jesus are humane treatment for all people, that’s a basic,” Larson Andrews said. “I observe that our immigration policies are deeply inhumane and beyond even just the legal policy, what is happening is beyond legality.”

Larson Andrews has become a vocal presence on social media since the Trump administration’s policies were implemented. She often takes to Twitter to show her disdain for the policy decisions. She does this through her own tweets and through retweeting other tweets supporting reform.

Tweeting statements like, “Keep Spokane Kind of a Sh*thole .” She also repeatedly shares the sentiment, “Abolish ICE” to her 179 followers and retweets even more politically charged statements.

Her focus has been concentrated on this issue in part, because of the members of her parish.

“Mostly, I think my passion of late comes from actually a lot of students that are a part of my congregation,” Larson Andrews said. “They’re making connections between the changes in the administration and changes in policy and what is happening among their friends on campus. Watching those students build these intercollegiate bonds in order to get work done it’s like ‘wow, they’re totally out-organizing us.’ I felt sort of called into it through their work.”

The younger generation of her group may have inspired her, but the rest of the assembly has been in full support of the activism.

“Our congregation, if I could describe them, they were a group of immigrants 130 years ago, Swedish immigrants,” she said. “[Back then] there was no policy. You could just show up and be, find work build a family, build a life. That aspect of their DNA kind of shapes their views on their neighbors.”

Despite having roots that connect her congregation to those in need, her following at Salem Lutheran Church still has area to grow.

“I think for the Lutheran church we have a little bit of atoning to do and a little bit of lament and reparation because we are a very white church,” she said. “That’s not a core value it is just a sort of happenstance thing about our culture. If were not careful about it, we can sort of promote a church that praises whiteness so I think we have to dismantle some things also.”

Larson Andrews’ congregation has hosted forums on immigration, visited the office of representative McMorris Rodgers, stood as allies at the bus stops and train stations where ICE may be. She herself has attempted to connect with a broad variety of pastors to best grow the churches practices.

Her call to action from her parish’s work is the disbandment of ICE.

“It’s only sowing fear and it is not keeping us safe.” she said. Instead, Larson Andrews is in favor of “a really radical change in policy that prioritizes a humane way and a fairly efficient speedy way to citizenship for anyone who wants that.”

As for the Jesuits at GU, Hagen believes they are advancing the ideals necessary to have faith as an ally for political change.

“When I look at the Jesuits I spend time with, the Fr. Steve Kuder and Fr. Brad Reynolds,” Hagen said. “They do a really good job of calling people to be what they are supposed to be and to be about faithfulness to one another.”

Even as more people are deported each day and refugees are left to remain in harm’s way, Larson Andrews relies on faith to provide a silver lining.

“The Bible is robustly dreaming, envisioning creating a world where boundaries of nation do not exist,” Larson Andrews said. So many images of what God was up to with humanity and creation was all about a will call to every nation. That’s what our biblical narrative is calling us to imagine. I think we need to flex that imaginative capacity and let Jesus lead us into that future. There are signs of hope, as rough as it is out there.”

Ian Davis-Leonard is a journalism major at Gonzaga University.

Previous Faith and Values: To manage negativity, look to the courage around you
Next POEM: Judgement Points a Finger, Compassion Lends a Hand