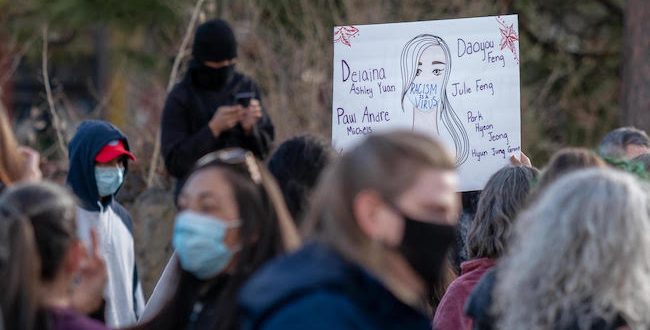 In response to the recent rise in anti-Asian hate, Spokane’s United We Stand is hosting Asian American and Pacific Islander Heritage Day from 11 a.m. to 4 p.m. Saturday (June 12) at CenterPlace’s West Lawn Plaza in Spokane Valley.

United We Stand members joined together for a vigil to honor the eight people killed in March in the Atlanta spa shootings, said community organizer Mark Carlos. They decided to plan an event celebrating AAPI culture to counter the hate they witnessed or experienced.

Organizers want to recognize historical contributions members of the AAPI community made to Spokane, Carlos said. Asian Americans who helped build Spokane, such as the Chinese and Japanese Americans who worked on the railroad system, are not recognized in local history education or books.

“We’re coming together to say ‘no more,’” he said. “We want to take over the narrative because the narrative has been set for us … we’re just trying to correct the record.”

AAPI Heritage Day is an opportunity for community members to counteract hate crimes by valuing and supporting one another, said Kristine Hoover, Faith Leaders and Leaders of Conscience member and associate professor at Gonzaga University’s School of Leadership Studies.

Even though people may have different backgrounds and perspectives, they can all come together with a common belief in human dignity, Hoover said.

Cultural performances will occur throughout the day, including martial arts demonstrations, singing and drumming. There will also be local vendors, food trucks selling different cultural dishes and representatives from community groups, Carlos said.

Representatives from FLLC, Muslims for Community Action and Support, the Spokane Hindu Temple and Cultural Center and other Spokane-based faith groups will be present, event organizer Charity Bagatsing wrote in an email.

FLLC will display art created by community members as a statement of solidarity with the AAPI community, Hoover said. The organization also hopes to share resources for reporting hate crimes, such as Spokane’s Hate Report.

This is the first time this event has happened in Spokane, but it is just the beginning of something bigger, said Sean Lizama, event committee member and Milestones Media founder. There will be more organized events celebrating different cultures in Spokane, such as barbecues and parties.

“I think it’s a good time for the first time,” he said.

Lizama said he hopes to see the event expand in future years to include more community members, politicians and local faith groups.

When Lizama moved from Tacoma to Spokane, he said he felt the AAPI community in Spokane was not integrated. He got involved with the event as a videographer to feel more connected to other Pacific Islanders.

“From conversations I’ve been having with Asians and Pacific Islanders, they don’t feel like they have much of a voice here,” he said. “But Asian Pacific Islander culture is part of American culture.”

Previous Mask on or mask off?
Next Why the legacy of Billy Graham continues to endure: 3 essential reads