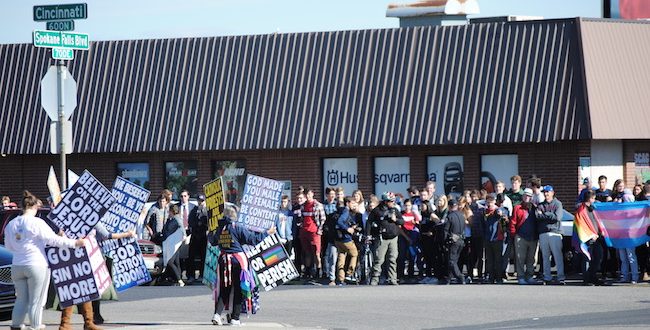 Thursday afternoon the intersection of Cincinnati Street and Spokane Falls Boulevard near Gonzaga University’s campus became a battlefield of free speech as Westboro Baptist Church (WBC), a hate group known for its anti-LGBT protests, and members of the Gonzaga and Spokane communities gathered to protest and counter-protest as police officers and Gonzaga campus security surrounded the area.

“It’s really important for me and my staff at my LGBTQ-friendly establishment that we come out and support this event,” said Randy Wagar, owner and operator of JR’s Bar-N-Grill and a member of the LGBT community who was counter-protesting the church.  He added that in situations like these it is important for the community to come together and support each other.

Throughout the protests, WBC sang covers to Katy Perry’s “Roar” and other songs, while counter-protesters had Queen’s “Bohemian Rhapsody” playing and members of the Gonzaga community sang “Go Gonzaga.”

Summer Sanders, vice president of Gonzaga’s Young Democrats and sophomore at the university, said that the organization decided to counter-protest to spread positivity to the community.

“We didn’t want to just give them [WBC] what they want, which is a reaction, but we want to spread a message of positivity to the community and everyone who’d see their signs and direct that to us,” she said.

Seeing how many people appeared at the event and opposed the views expressed by WBC, she said that it promoted togetherness, unity, and love for everyone.

Sanders added that a solution to countering hate is being the bigger person and directing positive messages of inclusiveness to the people who would see the signs of WBC.

In addition to posters that promoted love and acceptance, some people carried rainbow and transgender flags.

“I grew up in a red state and I grew up with no representation, nobody who was visible enough to reach out to and I felt very alone,” said a transgender counter-protester. “I’m out here because I want to be a part of showing our community that we don’t stand for bigotry.”

He added that the turnout of the counter-protest was beautiful and that it showed a lot about the community.

“The only thing that we can do is just continue to be a community and be there for each other and be visible because without visibility we are silenced,” he said.

Earlier in the day, the Spokane County Human Rights Task Force released a statement encouraging people to attend Gonzaga’s “Prayer at the Peace Pole” vigil or go to the 20thanniversary of Gonzaga’s Institute for Hate Studies tomorrow night instead of giving the church attention.

Also, they encouraged people to not engage or confront the WBC, but rather suggested that people donate 50 cents to their favorite charity supporting LGBTQ activities or to their favorite Catholic, Muslim, Jewish, or U.S. Military charity for every minute the church protests.

As the protests went on, cars honked as they drove by and counter-protesters cheering whenever WBC members put away their signs.

Previous Being Real about Christians, Mental Health, and Suicide: Tommie Kessler’s Story
Next Ask An Atheist: Stranger in Strange Land