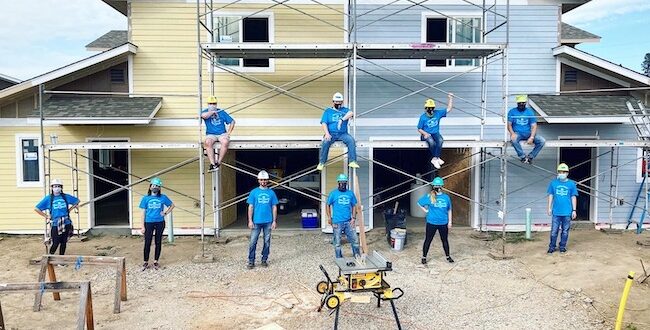 Spokane City Tax, Habitat For Humanity-Spokane, Will Make More Homes For The Holidays

Spokane City Tax, Habitat For Humanity-Spokane, Will Make More Homes For The Holidays

Two groups recently made “Home for the Holidays” carry new meaning for first time home owners in Spokane, but many hurdles stood in the way, including the COVID-19 pandemic.

The first was the Spokane City Council for passing House Bill 1590 on Nov. 30, which allows local councils statewide to levy local sales and use taxes for affordable housing.

The second was Habitat for Humanity-Spokane for continuing to build affordable homes for first-time home owners, specifically their 335th home since being in Spokane, which was dedicated on #GivingTuesday (Dec 1), and their 336th and 337th homes, which will be dedicated today (Dec. 11) at noon on Facebook live.

Habitat is an ecumenical Christian non-profit that helps people, regardless of who they are, build their homes and is one of several local organizations assisting the community with affordable housing options, many of which are members of the Spokane Low Income Housing Consortium.

According to Habitat CEO Michelle Girardot, the need is greater than it has ever been for affordable housing in Spokane. In this last year, applications to buy an affordable first home through their organization have increased 262 percent, and only about 20 percent of them qualify. Currently there are 48 families enrolled in their program working on and waiting to buy their first home.

“We are really coming up on the heels for what will be a housing emergency,” said Girardot. “And if we don’t start to see some investment in making housing available and a reality, then these issues that we’re seeing now are just going to skyrocket.”

She also added that the COVID-19 pandemic has added to the housing shortfall and increased the inability of low-income families to get into an affordable home. Girardot said the recent passing of HB 1590 will provide much-needed assistance, not just in creating homes but also in helping families stay in their homes, for instance, by providing gap funding for mental health needs or home repairs.

“We’re seeing so many of our neighbors hurting right now during a pandemic we’re called to stay home,” said Girardot. “It’s hard to do that if there isn’t a place to call home, but outside of a pandemic, I mean, all of these issues that we see in our community, a lot of them, are tied to housing. Without this initial investment, we’re going to see that the expenses of this emergency are going to be astronomical.”

The pandemic is not the only challenge, however. One such challenge was discovered in the last hours before the council was set to vote on HB 1590.

Passing the bill seemed like a done deal as there were four members who knew they were going to vote to pass the bill, which would have given them the majority they needed to raise the Spokane sales tax from 8.99 percent to 9 percent immediately.

The four council members who were going to vote yes were Breean Beggs, Kate Burke, Karen Stratton, and Betsy Wilkerson. Typically, that is all they would need to pass the bill, but at about 1 p.m. before the council meeting, a policy employee found language in the municipal code that said they actually needed five votes to pass this type of bill.

They didn’t have five votes for sure as Lori Kinnear and Candace Mumm were on the fence about voting yes, according to Wilkerson. At the last minute, a compromise was made with Kinnear and Mumm to add substitution language to the bill that would allow the city to find the money (about $5.8 million) elsewhere over the next three months, and if they do, the sales tax wouldn’t be raised.

While the substitution language passed 4-3 with a divided vote (with Burke, Stratton and Cathcart against it), this compromise language created more unity among the council members, as the bill passed 6-1, with Cathcart against.

According to Cathcart’s statement before the official vote of the bill, he thought a pandemic was a bad time to raise a regressive tax on the population and said more council effort needed to be given to modifying zoning codes that would open up more area to build housing.

“The thing that we could be doing immediately is starting to look and change the codes to enable more units to get built throughout our community,” Cathcart said.

He added that increasing taxes, when the city just increased the property tax and the state might increase our taxes for their needs is “going to be a pile on for a lot of people that are not working right now and are just barely hanging on.”

To Cathcart’s point, the fact Washington is on a regressive tax system (there is no state income tax) was another hurdle in passing this bill, as a regressive tax is a flat tax paid by all people and puts more tax burden on the poor.

Still, Wilkerson, who was a beneficiary of a federally-subsidized, home-buying program when she moved to Spokane from Detroit in 1989, sees this tax as an investment even from the lower wage earners toward purchasing a home.

“I believe a family is more than willing to pay $25 a year with the potential of owning their own home,” Wilkerson said. “That’s an investment I think they are willing to make. Otherwise the answer is no, it is not an option for them.”

While Girardot was disappointed that the city won’t start collecting money for affordable housing immediately, she still saw this effort as a win for the community.

“I think that it’s still a celebration at the end of the day, the fact that city council got something passed,” said Girardot. “If the question that their constituents are asking is, ‘OK, have you looked everywhere, have you turned over every rock,’ they have to be able to answer that honestly … [but] I wish that that homework was done sooner than later.”

Habitat began in Spokane in 1987 with just a handful of volunteers determined to provide affordable housing for those in need. The next year, they bought a home in East Central neighborhood and rehabbed it for their first family.

Families in their program agree to pay 250 hours of sweat “equity” as a down payment their own home, as well as attend financial and homeownership classes and workshops. The process typically takes about a year or a year and a half, so it’s not an overnight accomplishment.

Being in the middle of a pandemic has slowed Habitat down from providing families homes, due to COVID restrictions and a decrease in finances from private donors.

Still, the two families who are having their house dedicated on Friday have made it through both the pandemic setbacks and the program requirements. They will be in their first purchased home, beginning a new life with all the advantages that many in homes take for granted, according to affordable housing advocates.

Previous Church pageants go virtual amid a COVID-19 Christmas
Next Anti-Maskers in Moscow Try to “Bless Business” by Not Wearing Masks. They Failed.