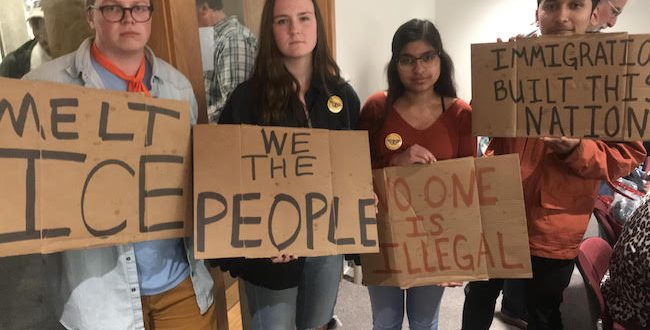 With a 6-1 vote, the Spokane City Council passed an ordinance Monday night that would require federal immigration enforcement agents to get a warrant from a judge before accessing non-public areas of city-owned property.

City Councilor Candace Mumm noted, though, that although the ordinance passed, it will be up to the mayor to enforce it.

In May, the U.S. Customs and Border Patrol (CBP) Spokane sector leadership revealed that they would add 30 more agents in Spokane. There have been reports of CBP rounding people up at the Spokane Intermodal Facility as well as boarding buses and requiring identification of those on board.

CBP agents responded by claiming these as, “routine immigration check operations of all passengers at the terminal.”

Many testimonies given in favor of the ordinance reminisced on bus stations as places where loved ones were met, but now fear of encountering armed agents while traveling through Spokane has become a problem. City Council Member Lori Kinnear highlighted health problems that may occur with the stress of constant fear while living in Spokane.

The few testimonies against the ordinance highlighted crime within the community. City Council Member Mike Fagan said property crimes are the largest problem in Spokane and said that although not every illegal alien commits these crimes, there are ones that do. Fagan, and others that were against the ordinance, stated that border patrol serves a purpose and the mayor doesn’t need to write off every occurrence.

The Greyhound, a major bus company that aids travelers all over the Pacific Northwest, is one of the targets for these routine checks by CBP. The Greyhound company has stated their objection to these operations but claims they must consent until Congress or the courts clarify federal law, according to documents. They also assert that the city of Spokane, as owners of the property, have the responsibility of preventing CBP from coming onto their property.

“[CBP] are doing a lot of warrantless searches right now,” says Paul Dillon, vice president of public affairs for Planned Parenthood of Greater Washington and North Idaho, “and what this ordinance is saying is that if you’re going to the intermodal station, you need a warrant and you can’t just do these random searches that are, let’s be honest, are really based on the color of someone’s skin.”

The ordinance urged the need for judicial warrants prior to any attempts at arrests for immigration enforcement on non-public or restricted areas, since these operations at the Spokane Intermodal Facility lack the proper paperwork. It is already federal law for the Department of Homeland Security to obtain a warrant or consent from the building’s owner prior to entering non-public areas.

“[This ordinance] is a big change for Spokane and it’s what we need right now especially when members of the community are being subjected to really hateful shameful rhetoric from this administration,” says Dillon, “and [it] sends a strong message of solidarity in Spokane by standing in times of fear.”

With the repeated presence of CBP at the Spokane Intermodal Facility, the City of Spokane decided to end building plans for an integrated social services center. There have been concerns that the CBP might affect the center’s intake however if the building were to be moved the project would cost tax payers $250,000.

If everyone who reads and appreciates FāVS, helps fund it, we can provide more local journalism like this. For as little as $5, you can support FāVS – and it only takes a minute. Thank you.

Mamaril is a senior at Gonzaga University majoring in Sociology with a minor in Journalism. Growing up her father heavily identified with the Catholic faith since he grew up in the Philippines. Her mom and her family are Christian but over the years she and her brother have moved between Agnostic and Catholic. Over the years she has become more spiritual than religious. Mamaril is curious how this may have happened and if others experience a similar question of faith and spirituality. Besides studying and researching, she can be found in small bakeries or at the dog park with her pup, Hobo.