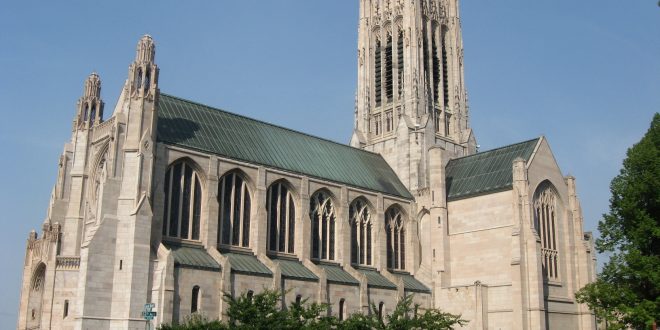 It’s been over a year since the lockdown began and organizations had to figure out accommodations to stay safe while maintaining operations. For local churches, they have done their best to follow safety guidelines and adjust to continue services.

They had to adapt and learn new techniques on how to maintain services and make it comfortable for people to attend online and in-person, as restrictions were lifted over the year.

The Rev. Tom Lamanna, pastor at St. Aloysius Church, said that the past year has been a changing landscape that has challenged them to be flexible and creative. Since Christmas, things have settled into a rhythm and it was good to be able to go back to church last summer when more places reopened.

Recently, Lamanna said that church staff has been able to perform anointing of the sick, something they couldn’t do during the shutdown.

“It was a great irony because the one sacrament that was needed the most during this pandemic was anointing of the sick and it was the one we couldn’t do,” Lamanna said.

During the past year, the greatest challenge for the church was creating protocols that helped parishioners feel comfortable to come back to the church. Following guidelines of Spokane Regional Health District and the bishop, Lamanna said the protocols had to be continually adapted from signing people in, contact tracing and logistics.

A year ago, all Masses were held online, especially their holy week services where all of it was done on a livestream rather than in congregation. Their new digital camera and upgrading their system in order to improve live streaming had been their most useful tool during the pandemic. Even though they were able to live stream, Lamanna said that it was difficult to have a strong sense of community at prayer from March through June.

Even after restrictions were pulled back and some people had returned to in-person services, a number of people are not ready to go to the church and are still praying the Mass from their homes online.

“Some people did joke with us when they came back that they were gonna’ miss being able to sit in their pajamas and drink coffee at Mass on Sunday morning, but mostly they were very glad to be back,” Lamanna said.

Moving forward, Lamanna said they are going to continue watching what Spokane Regional Health District and the Diocese of Spokane are saying about opening up. Even though ost of the state has moved on to Phase 3, he said that they are maxed out on social distancing, being able to have around 200 people in the church and are only having three Masses on Sunday morning. Currently, there is not a demand for a fourth Mass.

As the state continues to emerge from the lockdown, Lamanna said that he is looking forward to the next year and hopes that things will begin to look a lot more normal by summer. He thinks that there will need to be some renewed efforts of community building, but they do not know yet.

At the beginning of the lockdown, Andrea Olsen, director of music ministry at St. John’s Cathedral, said the church had to be creative due to poor ventilation, despite the large size, causing them to go down to a skeleton crew and one service on Sunday morning.

They had to do services through livestream, which was a great challenge due to the wifi signal and other technological aspects needing upgrades, but one of their choir members studied audio engineering which made it easier to produce the services.

On top of all that, the church organ broke at the start of the pandemic and their organist had to play piano.

Even though they were able to adapt to the COVID restrictions, Olsen said that other parishes in the Episcopal diocese that did not have as much resources could not hold service and the cathedral became the service for them across the Inland Northwest.

“The pressure was a little bit higher to make sure that we were producing something that was as seamless, tech-wise, as possible,” she said.

As for parishioners who did not use Facebook, they had to figure out which program to use so that it could go to YouTube and meet everybody where they are, while staying safe.

With the choir, Olsen had to lead hymns through livestream and rehearsals were stopped. However, the ‘hymn-along’ that was intended for the music ministry and congregation grew and, eventually, people from California and a former member from the East coast tuned in to listen.

She said that the pandemic made them see what other gifts they had at the cathedral and they were able to delve into other music that they would not have delved into, such as solo works.

Later on, they started offering outside services on the cathedral’s lawn, and gave the Eucharist through wafer delivery, gloved communion and little plastic cups for the wine.

“We mobilized pretty quickly and we definitely were on the conservative side right away, just going uber safe and everything that we could possibly do to ease the minds of our congregation,” she said.

Moving forward from a year ago, they held a trial run of an in-person service on Palm Sunday that was invite-only and used it to see what they didn’t prepare for.

Guests are required to register online to attend worship, which gives the church a checklist and body count. They are currently open to 30 family units and spread them throughout the worship space.

To cut down on sanitization work, the music and prayers are printed out on bulletins and the church has removed the hymnals and prayer books from the pews.

Despite air not being able to move around due to the large space, they are keeping the doors open to help circulate the air and their ventilation system is adequately filtering the air.

Olsen said that they have been following this model for a month and it is going well.

She added that much of their older congregation is now vaccinated and they have been some of the first to register for in-person services.

“There have been no reports or complaints from our members, and I think they are grateful to be able to attend church again, even with the safety protocols we have in place,” she said. “It is the seeing/being with each other that seems to bring them the most joy.”

Olsen said she is proud of what they have been doing and all the work they have put into adapting to the pandemic and restrictions.

Previous Bridging the news credibility gap
Next Accountability is Not Justice