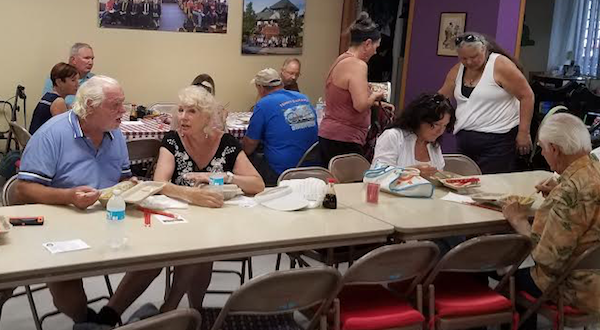 On a hot, sunny Saturday afternoon, attendees of all ages visited the Spokane Buddhist Temple to obtain an insight into Japanese culture as they dined on Japanese cuisine, amongst other activities, including the delicious taste of sweet and sour pork and chewy coconut flavor of mochi dessert amidst Buddhist literature, jewelry and other merchandise.

All the while majestic Japanese music played from speakers in the background as the Perry Street Fair ran outside the temple’s doorstep.

Mari Haworth, a member of the religious education committee at Spokane Buddhist Temple and co-chair of the Obon Festival, said the festival was brought to Spokane by Eileen Tanaka, who passed away last March, and taught people Bon Odori dancing. Haworth said this year’s festival was held in her honor.

“The Obon Festival, primarily, is a gathering of joy and we’re gathering and dancing in honor of our ancestors,” Haworth said. “And all of the people you know, your parents your grandparents, all of the people that lived and made it possible for you to live your life as you are right now. So, we’re honoring them in gratitude.”

Obon is an annual Japanese Buddhist festival that commemorates the dead.

“It is based on a Buddhist tale which describes how a devout monk dances with joy upon successfully releasing his deceased mother’s spirit from the Realm of the Hungry Ghosts,” the sheet said.  “Today, participants dance to express their joy to be living happily and to honor loved ones who have passed away.

The sheet described how a major part of the festival are folk dances, such as Bon Odori, that are performed to music that includes “the steady beat of a taiko drum.”

Haworth described taiko drums as large drums “made from wine casks with cow hides on either end,” and are related to Japanese martial arts.

“The guiding purpose of Bon Odori is to set aside the ego through unselfconscious dancing,” the sheet said.

Haworth said the dance is the last event at 6 p.m. during the festival and described it as “dancing in joy for your ancestors.”

“As Buddhists, we believe we thank all the cause and conditions that had to come together for us to be here right now,” Haworth said, which included the food an individual eats for lunch, the farmers who made the food, the person who “laid the street out in front of the temple” and every single thing that had to have happened for a person to living the life they have right now.

“I think one of the really exciting things about the festival is, for us, we’re honoring the Japanese culture and most of us here are not Japanese,” said Melissa Opel, a minister assistant at Spokane Buddhist Temple.  “But we’ve all formed strong connections to what we’re doing, and I think that the biggest thing that could be taken away from that is that we’re all really the same and, even though we do different things, we can all come together and have fun and enjoy other cultures and learn something and have a deeper appreciation for the world around us.”

Other items available for purchase included jewelry, t-shirts, greeting cards and other items.

One activity attendees participated in included kids crafts with KuroNekoCon, a local anime convention, where they were able to color in pictures of anime characters including those from “Pokemon,” “Digimon,” “Hello Kitty,” and “Sailor Moon.”  They were also able to learn how to make origami and learn how to pick up candies using chopsticks.

Other activities that occurred throughout the festival Saturday include Thai vocalist Narong Norasakkunkit singing Japanese folk songs, taiko drumming, and a temple open house to learn more about the Spokane Buddhist Temple and Buddhism.

Mike Motzer, an attendee, said he had been to the festival before and was interested in, “the exposure of Buddhist culture.”

“My father studied it fairly significantly and I’m certainly open to it, we are Christian,” Motzer said, referring to he and his family.  “One of the reasons we like this festival is it’s an urban festival so it feels different than the north end of Spokane dramatically.”

Motzer added he liked the sense of community at the festival and how people have brought their dogs and have a “community event.”

Haworth said the festival was also a fundraiser for the temple with profits going to maintain the temple.

The festival went from Saturday through Sunday.

Haworth said around 350 to 400 people attend the festival each year.