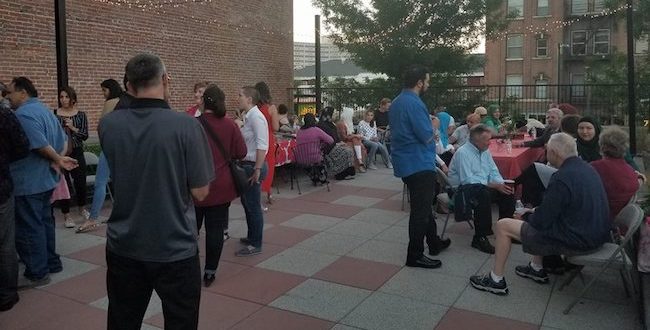 Last month, during Ramadan, a group of Muslims gathered on the rooftop of the Saranac Community Building downtown. When the sun began to sink, they prayed before breaking their fast.

But this Iftar was different than it had been on other evenings. This time a group of local Catholics stood shoulder-to-shoulder with them and joined in the prayer, and shared in the meal.

The event, which drew about 75 people, was organized by two community groups: Muslims for Community Action Support (MCAS), and Bridges Not Walls – a new Catholic organization aimed at fighting Islamophobia.

“As an individual, I’m really worried about the resurgence of bigotry I see in the country and I’m concerned it’s going to become normalized,” said Bridges Not Walls organizer Joan Braune, who works as a lecturer at Gonzaga University.

She said the idea for creating the group stems from the study, “Danger and Dialogue: American Catholic Public Opinion and Portrayals of Islam.”

“Even though most Catholics are not bigoted, it happens to be the case that a lot of leading pundits of Islamophobia happen to be Catholic and are often times given a platform because of  their Catholic identity through Catholic media or Catholic bookstores,” Braune said. “The report was really compelling.”

She had the study on her mind when she ran into Philicia Troup earlier this year, a fellow Catholic who had similar concerns about Islamophobia.

Since then, Braune, Troup and four other women from parishes across the area have come together, creating Bridges Not Walls as a way to bridge Catholic-Muslims relations.

The interfaith Iftar was their first event.

“I was not expecting so many people, not expecting that kind of success. It was absolutely joyous the whole time,” Troup said, adding that meeting likeminded people was affirmation that the group is on the right track.

Admir Rasic, an organizer with MCAS, said the two groups are planning on doing more events together in the future, possibly for Eid Al-Adha in August.

He said the Iftar had a strong impact on him.

“A lot of people ended up praying with us. I didn’t expect non- Muslims to pray. To me, it was another level of caring for your neighbor to go through the motions, to stand shoulder to shoulder and say, ‘I’m here for you, I care about your practice, what you value.’ That was neat,” he said. “It’s one of those things that make you feel so great to be in Spokane and in a community that cares about you and appreciates that you have a different way of practicing your religion.”

MCAS is currently hosting regular “Muffins with Muslims” gatherings. The next one will be at 6 p.m., June 27 at 601 W. Maxwell.

Visit the Bridges Not Walls Facebook page for information on their upcoming events.

Previous Gay Pride isn’t a sign of the End Times
Next Ask An Atheist: Will I see my loved ones again?