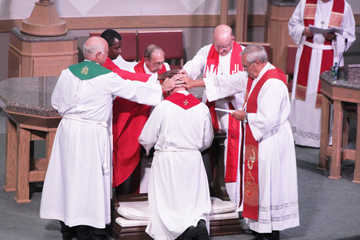 There’s a popular saying in church-planting circles: It’s easier to make babies than to raise the dead. That principle applies to denominations as well, said the Rev. Paul Detterman, who helped found the Evangelical Covenant Order of Presbyterians in January. “We thought it was easier in the long run to create something new rather than to keep on trying to modify existing forms,” he said. The “existing form,” in Detterman’s case, was the Presbyterian Church (USA), which remains the nation’s largest Presbyterian denomination despite a decades-long plunge in membership. The ECO may steepen that decline. Thousands of conservative Presbyterians, upset over the PC(USA)’s vote to lift its ban on partnered gay and lesbian clergy last year, are eyeing the new group. Planning for the ECO, which will not ordain sexually active gays and lesbians, preceded that vote, Detterman said. Nonetheless, the ECO represents the third new mainline Protestant denomination since 2008 to split from a national church following elections to permit partnered gay clergy. The Anglican Church in North America formed in late 2008, five years after the Episcopal Church consecrated an openly gay bishop in New Hampshire. In 2010, a year after the Evangelical Lutheran Church in America voted to allow partnered gay and lesbian clergy, conservatives formed the North American Lutheran Church. Leaders of all three new denominations say the gay clergy issue was only the breaking point for conservatives, after years of dissatisfaction with overbearing bureaucracies, membership losses and liberal theology. Pessimistic about changing that course from within, some conservatives jumped ship instead. “When orthodox and conservative Christians made homosexuality their flash-point issue, and they lost those struggles, in many ways they had no choice but to create these new structures,” said Mark Tooley, president of the Institute for Religion & Democracy, a conservative Washington-based advocacy group. The question now is whether these breakaway groups signal a seismic shift in American Protestantism, or just a few fissures in the theological terrain. In some ways, the rifts are nothing new. American Protestants have been splintering since Roger Williams left Plymouth Colony in the 1630s, said Nancy Ammerman, a sociologist of religion at Boston University. Yet the schisms counter a 20th-century trend in which ethnic and regional Protestant groups merged to form big-tent denominations such as the ELCA and PC(USA). “What we may be experiencing at this point is the limit of that movement to draw a lot of diversity under one umbrella,” said Ammerman, author of “Pillars of Faith: American Congregations and Their Partners.” Archbishop Robert Duncan, ACNA’s leader, said the new denominations herald a burgeoning movement. “There is a Reformation going on in the Christian church, particularly in the West, and particularly in the mainline Protestant denominations,” he said. Duncan’s ACNA seeks to supplant the Episcopal Church as the U.S. branch of the worldwide Anglican Communion. But some religion scholars say the new denominations are heading down a demographic dead end unless they can broaden their appeal beyond conservatives upset over pro-gay church policies. “Public opinion about gays and lesbians and gay marriage are changing so dramatically that at some point in the future — 10 years, let’s say — it’s not going to matter very much,” said Robert Wuthnow, a sociologist and director of the Center for the Study of Religion at Princeton University. Wuthnow and other scholars say American Protestantism provides fertile ground for offshoots, with membership losses in one denomination often encouraging the outgrowth of another. “People worry that they may be on the wrong track and decide to start something new,” Wuthnow said. The Episcopal Church, ELCA and PC(USA) have lost members for years, as have many North American denominations, conservative and liberal alike. Still, all three denominations dwarf their splinter groups. The Anglican Church in North America counts 719 member congregations; the Episcopal Church has more than 7,000. The North American Lutheran Church counts about 300 congregations, compared to the ELCA’s nearly 10,500. The ECO is just getting off the ground, while the PC(USA) has more than 11,000 churches. “The size is not as important to me as the faithfulness of what we’ve been challenged to do and to be in terms of our identity,” said NALC’s Bishop John Bradosky. In some cases, the new denominations have cooperated to meet those challenges. The new Lutheran church plans to partner with a conservative Anglican seminary in Pennsylvania, and the two denominations may even share clergy, leaders said. Lutherans also said the Anglicans advised them not to wait too long to create their new denomination. “They acknowledge that they took too much time in putting together an alternative to the Episcopal Church and lost a lot of good lay leaders,” said the Rev. Mark Chavez, NALC’s general secretary. The Anglican breakaway group also has been hampered by lawsuits and infighting. The Episcopal Church has sued to keep property claimed by departing congregations, and has won in most cases after costly and protracted litigation. Late last year, the ACNA lost one of its bigger members, the Anglican Mission in the Americas, after a bitter power struggle between its American and African leaders. “The present reality is brokenness,” Duncan wrote in a Dec. 20, 2011 letter to ACNA members. The dispute worried Episcopal Bishop Edward Little of Northern Indiana, who counts numerous friends in the ACNA. After the Episcopal Church began ordaining women in the late 1970s, four bishops left to create a new church, which then split into dozens of smaller denominations with more bishops than members, Little said. “A very sad tale indeed,” Little wrote in a recent email to a conservative blogger. “And, sadly as well, that pattern seems to be repeating itself with this newer iteration of Anglican breakaways.”

“Late last year, the ACNA lost one of its bigger members, the Anglican Mission in the Americas, after a bitter power struggle between its American and African leaders.”

ACNA actually brought a number of Anglican splinters together into one group (displaced Episcopals, REC, CANA, Recife, Southern Cone – to name a few). AMiA was never part of ACNA. They were loosely a “mission partner,” but refused to fall under ACNA oversight. AMiA split late last year (those remaining faithful to the Archbishop Rwanda formed PEAR).