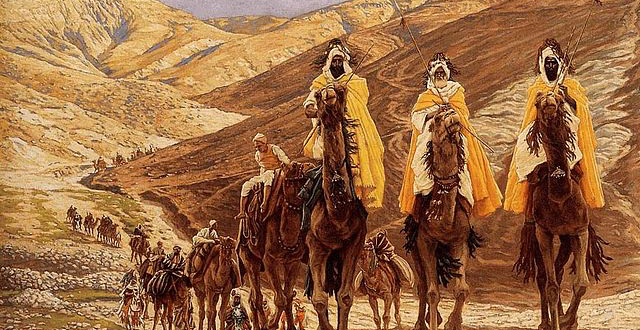 The Journey of the Magi/1894 painting

Epiphany and a Spirit of Grace

In Isaiah 60:1-6, we read about wise men from the East.  They are often referred to as Magi and, in today’s terms, were pagans.  They see a star rise and recognize that it signals the birth of a king.  And so they journey to Jerusalem to esteem and revere this new king.  As you would imagine, they go first to the Herod’s palace, for certainly, it would be their expectation that a new king would be born in the palace!  But this new king is not there.

Upon hearing what the Magi have to say, King Herod gathers the religious leaders of the time and they confirm the prophecy and, in doing so, affirm Herod’s worst fears.  If there is a new king for God’s chosen people, it means that Herod no longer has position, authority, or the worldly power that so many humans crave and defend. You’ll notice, though, that the religious leaders do not themselves rush to see God’s chosen one either.  As a result, we see that Jesus’ ministry to the outsider started immediately—it was the pagans who revered and worshiped him.

Alfred Plummer sums this up well for me in his commentary on the Gospel of St. Matthew.  He states:

Pagans, who had nothing to guide them but smatterings of science mingled with much superstition, nevertheless are so kindled with enthusiasm by the signs which God, by means of these imperfect instruments, had granted to them, that they take a long journey and make careful investigations, in order to pay reverence to the new Ruler who has been sent into the world.  But the Jewish Hierarchy, with the Pentateuch and Prophets in their hands, are so far from being elated at this report of the fulfillment of types and prophecies, that they do not so much as care to verify it.  They are content to be ruled by the Herods rather than be roused out of their accustomed modes of life.

That being said, it is the pagans who journey from afar and, in some sense, notify King Herod of this birth so spectacular that a new star shines. With confirmation from the religious leadership of the prophecy, King Herod acts out of fear. He gathers as much information from the Magi as he can—a timeline in particular—and sends them to find this new king. They are to return with information regarding his exact location so that Herod can go himself to pay homage. Later in the Gospel we realize that Herod gathered information regarding the star so that he could eliminate the threat of this new king through the slaughter of boys within that timeline. He was so concerned with maintaining his position that he wanted to have a backup plan in case the Magi did not return.

So the Magi leave Herod’s palace and journey farther to Bethlehem, again following the star until it stopped.  The Gospel states, “When they saw that the star had stopped, they were overwhelmed with joy. 11On entering the house, they saw the child with Mary his mother; and they knelt down and paid him homage. Then, opening their treasure-chests, they offered him gifts of gold, frankincense, and myrrh.”

“They were overwhelmed with joy.”  It is hard for me to believe that these Magi, who traveled so very far for so very long—maybe even two years—would have been overwhelmed with joy upon finding the place where Jesus was staying. The Gospel states that it is a house, but we can be sure that this house was not as grand as Herod’s palace.  The house would hardly be fit for a king—much less the Child of God.  Were we to put it in the context of a cooking show, Jesus’ house is the grilled cheese and Herod’s palace offers everything!  But that is where God led them through the star and they treated Jesus with the same customs and reverence as were applicable to the birth of a prince or future king.  They gave the precious gifts that were customary for a royal birth.  And when it came time for them to leave, they did so by another road because they had been warned in a dream not to return to Herod.

In many ways, I view Epiphany as paramount in the Advent Season.  This is the date when Jesus is recognized and heralded as King of the Jews through the actions and recognition of pagans. But we know very little of the Magi.  They get hardly any coverage in the story but their arrival is the catalyst for Epiphany.  The human side of me believes that they must have had some level of disappointment to not find this new king in Herod’s palace.  But we are told that they are overwhelmed with joy upon finding the house where Jesus was.

But then my mind wanders and I wonder if they ever heard anything more about Jesus.  Did they look back and wonder whatever happened to this young boy in a non-descript house who was the basis of a star appearing?  Did they come to find out about Jesus’ life and ministry?  Did they hear about his crucifixion as a criminal?  Were they aware of Jesus’ rising and anticipated return?

And, if they didn’t hear about any of these things, did they look back on their journey and wonder why?  Did they think it was a waste of time and resources?

The simple truth is that we do not know.

I wonder what would happen if we followed that same example. What if we looked on the meek and the poor and the ill as people whose potential has simply not yet been realized?  What if we changed our language from “us and them” to “us”?  What if we acted accordingly?

I like to tell a story from my time at college to illustrate this idea. I had two friends who shared a Costco membership and would make a weekly trip together. They would fill their carts and get more than enough of all of the great college foods Costco has to offer. Each week, they would stop at a stop sign on their route home where a man in need held a cardboard sign that simply stated, “Hungry.  Anything helps.”  And each week, the driver would start to pray out loud for this man.  “God, give this man food and sustenance and lead him to you.”

Around the fourth week of my friends going to Costco together, passing the man in need, and the driver praying for the man to have sustenance, the passenger rolled down his window and started yelling to the man in need.  The driver was beside himself.  “What are you doing?!?  He’s going to come over here!”  The passenger called out to the man and said, “The box closest to you in the back is for you.”  The man took the box from the back of the car and, with tears in his eyes, thanked the passenger.  The driver was livid. “What were you thinking?  I cannot believe you did that!”  The passenger simply responded, “Now you don’t need to pray for him to have food.”

The passenger took a very simple approach to this man’s need. He saw a need. He saw a way that he could address that need.  And the immediacy of that need was addressed. It was another form of the grilled cheese approach. Often, simple is sufficient. And simple has an impact that we cannot fully understand.

But how often do we act in the same way that the religious leaders are portrayed in the Gospel lesson?  How often do we ignore what God is asking of us because we are too tied to our own routine?  Are we too satisfied where we are to fulfill the potential God has for us?  Or, maybe more realistically, are we overwhelmed with the complexity of a major issue like homelessness and subsequently forget that we can maybe help with the hunger?

Arise, shine; for your light has come,

and the glory of the Lord has risen upon you.

For darkness shall cover the earth,

and thick darkness the peoples;

but the Lord will arise upon you,

and his glory will appear over you.

Nations shall come to your light,

and kings to the brightness of your dawn.

The light has come. And those of us who follow Jesus adopt this light and wear this light as a beacon of hope and love. The light penetrates even the darkest of places and has the power to penetrate those in the darkest places. So in this season of Epiphany, I invite you to adopt the light.  And adopt the light where God leads you.  It is not necessary or required that you use every talent in an attempt to impact the world.  In fact, I would argue that God does not call the equipped, but rather, God equips the called.

So in this season of resolutions and expectation of what this new year has in store, may we seek out the simple ways in which we can impact those around us and may we wear the light with the expectation that God will use us to illuminate the dark places with hope and love.

Previous Upcoming lecture to focus on Muslim Perspectives on Religion and Politics
Next Their Blood Still Cries Out: A defense of executive action on gun violence