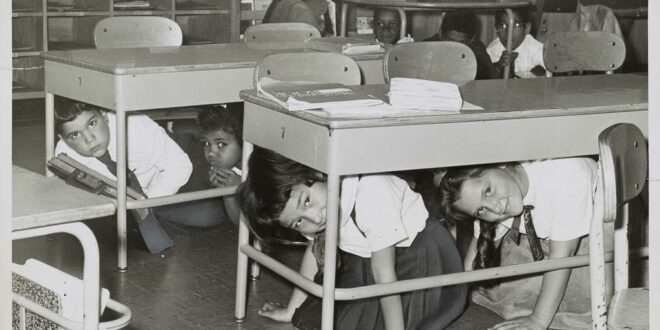 I was in elementary school when our teachers directed us to hide under our desks to practice preparing for the possibility of a nuclear war. The Cuban missile crisis was exactly 60 years ago and brought us to the brink of a nuclear war with the former Soviet Union.

Thankfully, President Kennedy found helpful back channels to communicate with Nikita Krushchev, and he backed down.

We are facing a similar crisis this October. President Biden recently said at a fundraiser: “I don’t think there’s any such thing as the ability to easily (use) a tactical nuclear weapon and not end up with Armageddon.”

As CNN columnist Stephen Collinson reported, it is “bone-chilling” to hear an American president talking so frankly about the possibility of a nuclear Armageddon. U.S. officials, and others, are growing increasingly worried that President Putin is feeling personally and politically trapped into a corner, with no exit that would save face.

As a result, he might consider using tactical nuclear weapons in a desperate attempt to change the course of the war in Ukraine. Frankly, these concerns further escalate the warning “100 Seconds to Midnight” on the Doomsday Clock recently summarized in a Sept. 27 SpokaneFāVS column by Steven A. Smith.

Just as hiding under a desk wasn’t an effective response to the threat of a nuclear war, neither is being silent about these growing risks. I am deeply troubled to read increasing articles in the media referring to the possibility of a “limited” nuclear war.

They remind me of the metaphor of the “boiled frog syndrome” when our horror about the crossing of a nuclear threshold is gradually worn down until it becomes more acceptable–with catastrophic results.

Incremental changes can erode our conscience so that we gradually tolerate, and even justify, increasing levels of violence and destruction. The conscious extermination of 6 million Jews in Europe didn’t happen overnight.

In disturbing parallels to our own era, Hitler came into power due to a small, dedicated and zealous group of followers who were righteously motivated to avoid communism. They fused a marriage between political power and conservative Christian religious leaders to make Jews the scapegoats for all of their national problems.

David Puttman in a House of Lords discussion on his experience of populism, recalled how Albert Speer, Hitler’s Armament Minister and chief propagandist, made this point: “It is quite shocking how quickly the unthinkable becomes thinkable, then normalised, and, eventually, in the final phase of populism, brutally enforced.”

We must speak out whenever any political or religious leader tries to sway public opinion to justify using excessive force, by using terms such as “limited” nuclear weapons.

As President Kennedy reflected after the Cuban missile crisis: “Above all, while defending our own vital interests, nuclear powers must avert those confrontations which bring an adversary to a choice of either humiliating retreat or a nuclear war. To adopt that kind of course in the nuclear age would be evidence only of the bankruptcy of our policy — or a collective death-wish for the world.”

There are no innocent bystanders. As Martin Luther King, Jr., cautioned us: “The ultimate tragedy is not the oppression and cruelty by the bad people but the silence over that by the good people.”

Protestors in Russia are risking spending 15 years in prison for speaking out against the war. We have the freedom, as well as the responsibility, to let our governmental leaders know that we do not support escalating the war in Ukraine.

Let’s maintain the worldwide taboo on using any type of nuclear weapon. As people of faith, join me in praying for all those in leadership to find diplomatic back channels that will support wise and humane options to de-escalate this world crisis. In a nuclear war, there are no winners, only losers.

Susie Leonard Weller holds a master’s degree in pastoral ministry and works as a certified life and spiritual coach. Learn more about her at https://www.susieweller.com/index.html

www.susieweller.com/index.html
Previous Martha’s Vineyard, the Law of Refuge, and Jesus
Next Suicide Prevention in Black Churches: Reclaiming Culture and Power