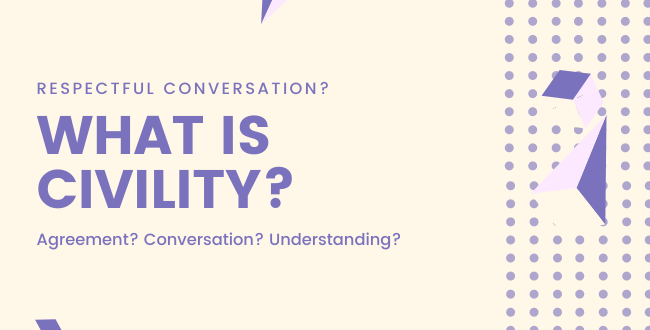 Sometimes Civility Is A Luxury

There has been a very vocal call lately for civility in discourse, particularly political.  How do you define civility?

For some people, “civility” seems to mean behaving “respectfully”—e.g., no name calling or mocking. I would argue that, to be civil, one does not need to be polite, but one must be respectful.  If someone is mocking someone, calling them names, attacking them (physically or verbally), the aggressor has forfeited the right to have their victim say, “Please,” and “Thank you,” in response. There is, however, a need for respect.  Often being respectful and polite overlap, but they are not always one in the same. Lately, I’ve come to discover that for some, the demand for civility is a demand for a lack of emotional response of any kind. Some people mistake any hint of anger for rudeness. That sort of civility calls for a kind of forced forgiveness.

Forgiveness has been a hot topic of discussion lately.  Botham Jean’s brother Brandt hugged his brother’s murderer and publicly declared he forgave her. Ellen DeGeneres spoke on her show about forgiving President George W. Bush for his work fighting against LGBTQ rights during his administration.

Ellen has warm feelings towards former President George W. Bush and she has a right to her own feelings. So too do military members have a right to their anger regarding physical and mental injuries sustained during the ongoing Iraq conflict. Military children have a right to their anguish over parents killed in action. Civilians from Iraq and Afghanistan have a right to their outrage over their murdered family and friends.  LGBTQ people have a right to mourn the lives they were not allowed to live during that presidency.  They all also have the right to live their lives without being forced to be a teacher to those who want to poke at their passion because they don’t understand it. It is not their responsibility to educate others on their feelings: many articles have been written that explain what occurred during that presidency both in the U.S. and beyond.

Brandt Jean has every right to his own feelings and those people who feel differently have every right to their own. Those who are angry about Botham Jean’s murder and who are furious with his murderer, society, and the history that has contributed to his death are not obligated to sit at the table to discuss the topic in conversations full of “Please,” and “Thank yous.” They should not be tasked with educating the public as to why and how the political and socio economics of the United States contributed to their feelings.  Articles and conversations on the topic of race relations exist and are widely available.  They are accessible to all of us and we can read and research.  If we want a civil discussion, it is up to us to bring an educated view to the table. If the obvious wave of anger rises on their faces or in their voices while they discuss the topic, that is not a lack of civility. One should not be excluded from a conversation because they feel strongly about it.

When teens that survived the Parkland school shooting speak out passionately about gun control, some politicians lament that their passion makes civil discussion impossible.  It has been interesting to watch interviews with the teens and listen to discussions afterwards where some declare the teens behaved respectably, but others watch the same interview and declare the teens “rude” and lament their lack of civility.

Forgiveness in Judaism is complicated. Judaism’s view on forgiveness is very different from that of Christianity. In Judaism, those who have been wronged are not obligated to forgive. Those who have wronged cannot be forgiven unless they sincerely apologize to the person they wronged and change their behaviors. There are specific requirements for how one must ask for forgiveness and how behavior must change. This, however, is another discussion for another article.

There absolutely is a need for respectful conversations. Full discussions where no one is mocked or called names should be the norm, not a luxury.  In order to have those discussions, we need to come to the table fully informed.  We need to recognize others have different experiences. For many, politics is a philosophical debate, but for some, political rulings and leaders directly changed their lives. What is simply an idea to one person is a physical scar to another.