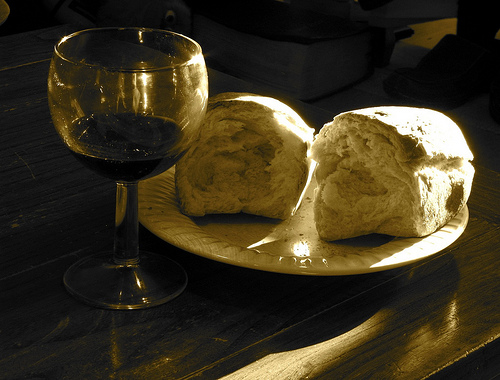 Some bread, some wine and a revolution 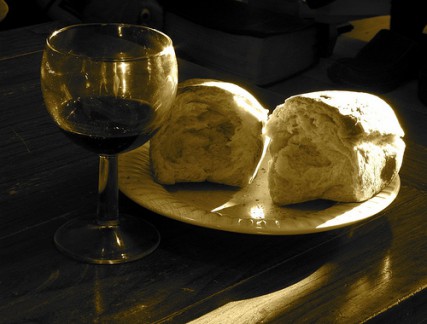 I have been known to go on and on about subjects I am passionate about. I have even been given opportunities to speak and write about these subjects, including the most influential website in Spokane — Spokane Faith & Values. I care about equality, justice, grace, forgiveness, and acceptance. I care about talking to people from every walk of life about how to make tomorrow better than today, and I also care about connecting people with resources with opportunities to help people who do not have resources. I love words, and I love shaping them and stitching them together to convey meaning, and yet I now know that for all the words and all the languages in the world, as vast and beautiful as they are, there is only a few things I can actually say, “Here, this is the body, which is broken for you, and here is the wine which is the blood shed for you.”

The scene in the upper room was not the first time that a biblical prophet held up bread and wine and shared a teaching. The first time was in the homes of a group of slaves in ancient Egypt. All day every day these slaves made bricks. They were slaves, property, sub-human. There function was to work seven days a week building the infrastructure of the Egyptian Empire. This group of slaves, feeling the boot of the empire on their neck, began to cry out to their God. Their God heard their cries and sent a prophet named Moses to intercede on their behalf for their liberation. After a long series of plagues and an episode involving a bloody river Pharaoh, the ruler of the Egyptian empire, decided to let the slave nation go free.

On the night before their liberation, the God of Moses and the slaves told them to have a special feast — a liberation feast. Lambs were sacrificed and eaten, unleavened bread and wine were consumed with haste. They marked their allegiance to their own God and their own people by eating the meal as instructed and marking their doorposts with the blood from the lambs they sacrificed. It is a feast, but it is also a loaded political move. It is the equivalent of the ‘I have a Dream’ speech, or a march on Washington. This meal is about an exodus, and freedom!

Freedom eventually finds this group as they settle in a land and appoint kings, but the temple in their new land is eventually destroyed and they are carried off into exile. Generations later they are allowed to return and rebuild, but they are under constant occupation. After thousands of years of faithfully observing the liberation meal, the Passover, they begin to have a sense that perhaps their God has a new exodus in mind. Not just an exodus from slavery in Egypt, but a liberation for the whole world and the establishment of a whole new kingdom whose laws are peace, justice, grace and freedom from all that oppresses. The Passover was the meal that fostered this hope.

For thousands of years in every home this tribe would eat this meal. They would hold up the bread and say this is the bread of our suffering. It is a reminder that their God had freed them, and that they would one day be free again. Four cups of wine would be served symbolizing the promises of God. There would also be a fifth cup symbolizing their hope in future redemption.

Fast forward to Jesus. He had to Jerusalem, like many faithful Jews of his day. Preparations for the Passover had been made. After the meal, he took the bread, which had previously symbolized the affliction of his people, and in many ways the affliction of all of humanity, and his disciples would have known what he was going to say, “this is the bread of our affliction,” but he doesn’t. He says, “This is my body, take and eat.” In a similar way he took wine, but he doesn’t say “these are the promises of God,” or we look forward to a day when…” He says, “this is my blood, and this is a new covenant, and it is poured out for the sins (read the entirety of that which afflicts humanity) of many.”

Thousands of years of waiting, praying, singing, and hoping and Jesus says, this moment is happening now. This meal is not about feeling guilty, it’s not about how evil humanity is, it is about a new covenant, a new relationship, and a new vision for the future of God and humanity.

Jesus is announcing a revolution!

It is an overthrow of the whole world. The old systems were about sin, death, power hungry militaries, disease, and brokenness.

Jesus is saying, “I am launching a revolution…Who is with me?!”

Just like the meal in Egypt, this meal is about allegiance. It is hyper political and it has profound meaning in real time with real people in real places.

The question I must face, and I believe all of us face every day, is what kind of people are we going to be? Are we going to grumble for decadence, militarism, exploitation of the poor, and oppression of the underrepresented? Or will we be people deeply in tune with the new things that are being set loose in our world: freedom, equality, justice, hope, forgiveness, and grace?

The meal itself is an embodiment of this movement.

Bread does not grow on trees. Wine does not bottle itself on the vine.

Bread is about taking raw ingredients and putting them through the elements of human design. Wine must be grown, aged, processed, fermented and bottled. Bread and wine are a picture of God partnering with humanity to make a meal to be shared with the world.

Faith traditions of all kind have created dichotomies where spiritual things: God, worship, discussions of scripture, prayer and so on are considered good, while so-called human things — food, sex, relationships, money, and design — are considered bad. They create categories like: spirit and flesh. They have a turned a vision of harmony into a battle royale within the human heart. This dichotomy gives rise to beliefs that would see the disembodied soul of a person fly away while all that is physical burns, but this is foreign to the world of Jesus.

The two can never be separated. This meal is an invitation to partner with God to make the world better. It is a meal that looks back to the first exodus, we are all slaves in some way. We have all hurt and offended people, we have been addicted to something, or used people, and returned violence for violence. So many people live with a deep sense of guilt that what they have done, and the person they have been will always dictate who they can become. People are also chained to long lists of people that have hurt them. They keep a ledger of pluses and minuses, and they hold grudges and plot revenge. We are all in on it. So this meal looks back and acknowledges slavery and calls it what it is. It also looks back to the Upper Room and the movement launched by Jesus.

It is easy to see how this has gone off the rails: scandal, rape, AIDS, war, and the little hostilities we all face every day.

But it is also possible to see this movement alive and well. To quote the U2 front man Bono, “God is in the slums, in the cardboard boxes where the poor play house. God is in the silence of a mother who has infected her child with a virus that will end both their lives. God is in the cries heard under the rubble of war. God is in the debris of wasted opportunity and lives, and God is with us if we are with them.”

This hope is in the face of the drug addicted realizing for the first time that they can be free and that they do not have to be who they always were. It is in the back rooms where a millionaire realizes that perhaps their resources are not for hoarding, they are for making a better world. Hope is sitting just across the table when you ask a friend for forgiveness.

This hope is everywhere, and I believe it is alive in every human heart, like a small flame, just waiting to be fanned and let loose. The good news of the meal Jesus shared with a few friends is that this movement is for everyone, but it is going to take everyone as well.

I may speak in different terms and practice it in different ways, but ultimately all I can do is point to the bread and the wine and say, “This much I believe to be true…let’s go and change the world together.”