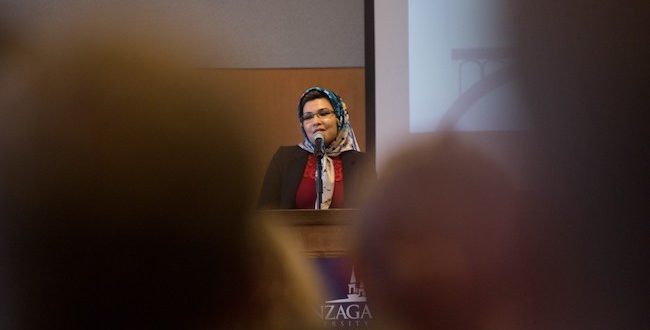 Solidarity strikes a chord with Spokane for “Rally With Refugees”

Spokane has rallied again for the marginalized, this time for the refugee population. On Sunday, Rally for Refugees was hosted in Gonzaga University’s Hemmingson Ballroom to ”meet with the vulnerable to educate and mobilize.”

The 9,275 square foot ballroom was filled to capacity, with an estimated 300 other attendees in the lobby who were directed downstairs to watch a livestream of the event. The rally was a collaboration between GU, Whitworth University and the Moody Bible Institute and several hundred members of the Spokane community.

“We’re going to let you engage your hearts,” said emcee Mark Finney of World Relief Spokane, who also helped coordinate the event. “We’re going to let a number of refugees in our community share their stories so that this isn’t just a bunch of statistics, but that these are real people.”

Finney’s introduction came after a dance by the Neema Choir, which is comprised of refugee children.

“Make no mistake, we are not here to condemn the president of the United States, who has been democratically elected, but rather we are here to assure our solidarity and unity as residents of Spokane,” said speaker Nesreen, a 12-year-old refugee living in Spokane.

The rally was sparked due to executive orders outlining the travel ban, though refugee aid is year-round regardless of political turmoil. World Relief Spokane has existed for 25 years for precisely that cause.

Upendra Acharya, human rights advocate and associate professor of law at GU’s law school, led a quick and informative “Refugees 101” session in which he identified what a refugee truly is: a person forced to flee their country due to persecution and seek refuge from a safer country. This delineates refugees from immigrants who seek to enter other countries under free will.

Acharya cited a United Nations statistic that said there are 21.3 million refugees in the world with an additional 3.2 million asylum seekers.

“Our heart is full of pain because of being refugees,” said Sooraya, a Muslim refugee from Afghanistan, who urged the audience to embrace refugees, especially because refugees look to America as a place of freedom and opportunity. “We just need a safe place. We just need a place that we can call it home and we can start our lives. So please don’t close the doors of our hope.”

The audience was sympathetic and receptive.

“[The travel ban] is really harmful to the community,” said Ellen Maccarone, an ethics professor at Gonzaga. “It puts vulnerable people at much more risk. I wanted to be here to show that it’s not the prevailing attitude of most.”

A small two-person counter protest occurred at the livestream of the event on the first floor of the Hemmingson Center. One man wearing a Trump shirt held a sign that said “America Primero,” meaning “America First,” alongside a woman holding a sign with Bible vs. Quran” verses. Students who were near the protestors said that others argued with the protesters before they abruptly left.

Another goal of the rally was to engage the community in a healthy dialogue with actual resources and ways to get involved with refugee advocacy.

On Thursday, a legal discussion on similar issues will occur at the City Council Chambers at 6:30, and on Feb. 17, a benefit concert will take place at St. John’s Cathedral.