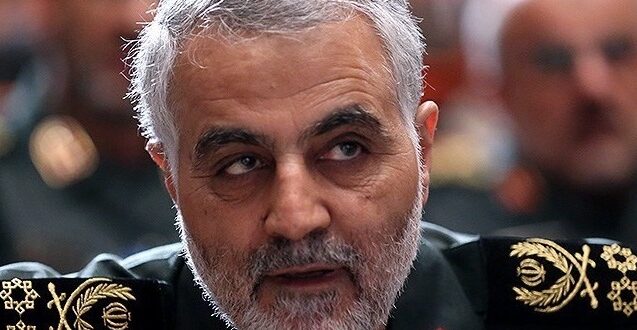 General Soleimani in the NAC, a conference of generals of Iran/Tasnim News Agency

Soleimani’s death an opportunity to grieve for your enemies

On Jan. 3, in the dead of night, US missiles struck two cars leaving Bagdad airport. A man named Qasem Soleimani and several officials from Iran-backed militias were killed.

Qasem Soleimani, the 62-year-old Iranian who headed the elite Quds Force, was the second most powerful person in Iran. President Donald Trump, we are all aware by now, ordered Soleimani’s execution. Shortly after he received word that Soleimani died, Trump went online and tweeted a picture of the American flag. He also tweeted that Soleimani was responsible for thousands of American lives, that he was plotting to kill many more, and that his execution should have happened years ago. Since that time, Trump has been using Soleimani’s death as a campaign pitch to demonstrate how tough he is on terrorists and that he is the kind of commander and chief we want to keep around in 2020. In lockstep, the proverbial other side of the isle has been questioning whether Trump overstepped his power and whether Soleimani’s execution really made the United States safer.

We are, quite literally, a captive audience.

Iran’s Supreme Leader, Ayatollah Ali Khamenei, promised immediate and severe retaliation. More missiles flew in the air. At his funeral on the streets of Tehran, the supreme leader said prayers and wept over Soleimani’s casket. In her eulogy, Soleimani’s daughter vowed to avenge her father’s life with the agony of American suffering.

Last Monday, on Jan. 20, I marched through the streets of downtown Spokane. It was Martin Luther King, Jr. Day. Arm in arm with a number of Quakers from Spokane Friends, I held a sign, produced by the Friends Committee on National Legislation, that read: “#LoveThyNeighbor (No Exceptions).” As I walked through the icy streets—thinking of how much harder it was for King to march given the violences that threatened and ultimate stole life—I imagined Soleimani. I held Soleimani in my thoughts and in my heart and said to myself, through my ignorance and the unconscionable evil he committed, “I love you, Qasem. God teach me to love you.”

To be honest, I don’t know much about the man. I know his father was poor and that Soleimani began working construction at 13. I know he had a family. I know he became a great military leader and that he considered war a kind of heavenly orchestra. I know people in the United States, most of whom could not pronounce his name a month ago, are convinced that he is a terrorist. People in the United States may not agree with his execution, but no one is mourning the death of Qasem Soleimani. No one sheds a tear for a terrorist.

I am grieved because we are not grieving. A beloved child of God fell down. I am mourning that we are not mourning. It is a sacred tragedy that a brother in the human family fell in love with war, stole innocent lives, and died without making amends.

Our love has become love cheap and easy. Love is not red, white, and blue. We have forgotten, or never really learned, what it means to love our enemies. King taught that hatred cannot drive out hatred, that darkness cannot drive out darkness, and that violence begets violence. He marched for his friends and his enemies because he knew what was at stake. If we do not fight nonviolently for real and robust social justice—mentally, emotionally, and physically—we will wound ourselves without knowing it and surely fail to build the kind of world we all long for.

Where are you learning to fight for peace and love what you hate? The Quakers at Spokane Friends are teaching me. Every Sunday morning, we sit down in a holy silence. In open worship, we wait for the God of Peace to stir our hearts and minds. And then we listen. Come join us sometime—we need to hear how God is stirring you.

Paul Houston Blankenship is an interim pastor at Spokane Friends and a PhD candidate at the Graduate Theological Union in Berkeley. He has taught theology and religious studies at Seattle University, Fordham University, and UC Berkeley. Paul’s dissertation, Soul Suffering, is an ethnographic study about the spiritual lives of people living on the streets of Seattle.