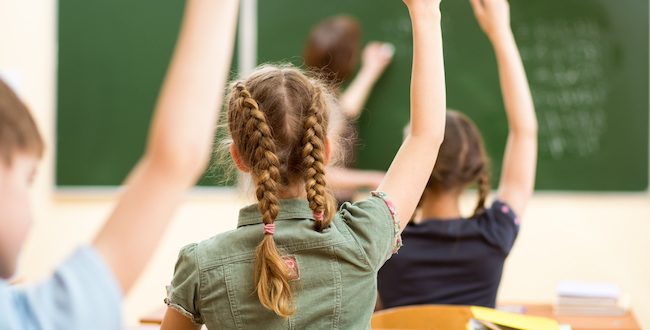 School children in a math class/DepositPhoto

We keep our promises.

My mother taught me that simple lesson too long ago to remember the circumstances.

Promise keeping is one of the most basic human values, transcending time and geography. As human civilization developed a person’s word was a binding agreement that was essential to the growth of trade and industry, to the development of community. A contract is simply a promise reduced to a legal document.

We keep our word. And when we fail to do so we break faith with those on the other end of the promise. Sometimes that break is irreparable. All of us have experienced managing broken promises made to us and breaking promises to others. That is human nature.

Institutions make promises just the same as individuals. Colleges and universities promise a quality education in return for a student’s tuition. The furniture store promises to honor its money-back guarantee. The car dealer promises you the best deal possible. The newspaper promises daily home delivery no later than a designated time.

Governments make promises, too. But when government breaks a promise the effects can be devastating to entire populations, the damage to trust and credibility damaged beyond repair.

The Declaration of Independence was a promise – all men are created equal, entitled to life, liberty, and the pursuit of happiness. But we know that promise was not made or kept for a majority of Americans in the beginning and for too many Americans today. We will continue to live with the consequences of that broken promise for uncounted generations.

Maybe the most important promise we make, as individuals and as institutions, is the promise to protect and nurture our children. That is not just an individual promise. It is a promise made by society. If parents cannot properly protect their children, society is prepared to step in.

What happens when society, in the form of local, state, and national governments, prepares to break that promise in order to promote economic growth or, worse, political ends?

That is not a rhetorical question. The president of the United States, his secretary of education and others in the federal government are demanding that K-12 schools and public colleges and universities bring students back to the classrooms full time when schools open in August. The president has suggested holding back federal support for schools that fail to meet that schedule.

Meanwhile, the U.S. is on a terrifying Covid-19 trajectory, particularly in states that were slow to respond at the outbreak’s beginning and which re-opened too soon. No other nation in the world is experiencing such a rapid increase in daily cases confirmed and in Covid-related deaths.

The Centers for Disease Control and Prevention supported school systems that chose to close in the spring. In May, under some pressure, the CDC issued guidelines for re-opening in the coming school year. The guidelines call for mandatory masks, classrooms re-modeled to support social distancing (meaning fewer students in a classroom), new personal and school hygiene procedures, and even staggered schedules. The mask recommendation is already proving problematic. What is a school system to do if some parents object for political or religious reasons? We demand students be vaccinated to attend public schools. Do we expel those who refuse to wear masks?

Yes, keeping schools closed with online instruction only produces other problems, especially for working parents. But managing to solve those problems might be easier than managing public school openings in Covid hotspots.

Here is the bottom line. Something on the order of 57 million youngsters will return to schools, pre-K to 12, for the 2020 school year. As the number of confirmed Covid cases and deaths surges nationally, some number of those children will die. Others will become infected, show few if any symptoms, and then take the disease home to family members, some at high risk.

There is no firm data available to say with certainty the mortality rate for young children or even the frequency or manner of Covid spread among youngsters. There have been some high-end death estimates of one tenth of one percent. If that worst-case scenario were to be true and infection rates among young people were to rise in proportion to the rise in the general population, that could mean something on the order of 30,000 to 50,000 dead children by the end of the year. But if the mortality rate is half of one tenth of one percent or even half of that, the death toll still could be in the range of five figures. Is that a price we are willing to pay for the appearance of economic normalcy?

Further, CDC officials said full re-opening poses the greatest possible risk in terms of spreading the disease further into the general population. Teachers understand this, and all over the country are pushing back on re-opening plans.

CDC officials said earlier this month that local school districts should have the option of making local decisions based on local data. That makes sense. There are areas where the virus currently poses a limited threat and re-opening might carry little or no risk — at the moment. Other school districts in those COVID hot spots are defying the president and already have announced fall classes will be virtual.

But the president and his education secretary say “no” to local control over any re-opening or any compromise to a full re-open. In interviews a week ago, Education Secretary Betsy DeVos supported the president’s suggestion that schools that fail to comply lose federal funding.

This is a broken promise. Instead of doing everything possible to ensure our children are protected from the devastating effects of an unchecked pandemic – or that their families are protected from relatively uncontrolled spread – we are preparing to sacrifice their well-being for what seem to be political and economic goals.

There is considerable uncertainty in managing to this horrifying pandemic. Best-case scenarios may be just as wrong as worst-case. In the end, all society can do is put some trust in the scientists and medical professionals who are relatively unanimous in opposition to a blanket re-opening of our schools. Following facts-driven advice is our best means of fulfilling our promise, to nurture children and keep them safe.