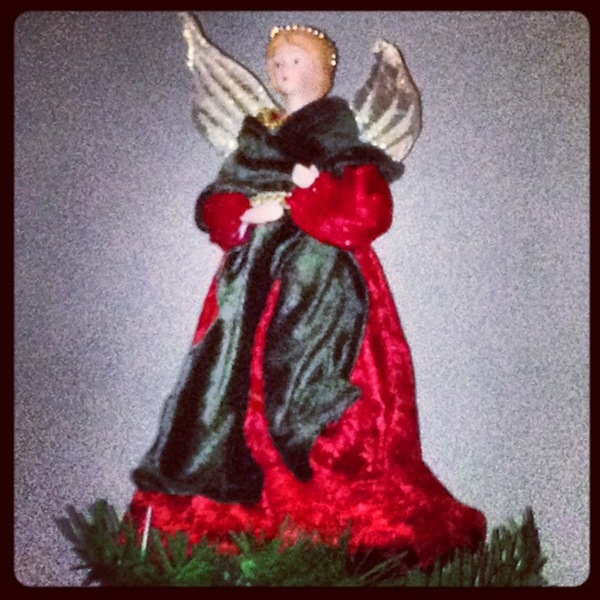 So this is Christmas…

My husband, Chris, and I decided to have a “real” Christmas tree this year. By “real,” I mean, “fake,” but also I mean, “more real than the three-foot, self-lit, $10 one Chris bought years ago, before we met.” A “nicer fake” tree, if you will.

Chris started the decorating — stringing up LED lights all over the inside of the house. I pulled out the Christmas tree from the garage. He vetoed it: “It was cheap when I bought it, and it didn’t age well!” Then he mentioned that his mom had a spare tree she bought last year, just sitting in her garage, unused. He said she would give to us, or loan it to us, if we asked.

Then, he asked, “Where are we going to get more decorations for a bigger tree?”

Without pause, I said, “I know!  My mom!  I’m sure she has decorations that she’d love to get rid of!”

My mom, before we arrived, had pulled five of those clear-tote bins out of her basement, with lights, glass bulbs, special ornaments, candles, table linens, and tchotchke, (or “dust gatherers,” as she calls them).

She said, “You have to take the whole boxes — you can’t sort the stuff here!,” and we left her house with four bins of Christmas decorations.

We got home and started unpacking them. As Chris unpacked a box, he muttered, “Hester?” and unwrapped the crepe paper to reveal an angel-tree-topper, a woman angel with wings. She’s wearing a scarlet velvet dress, with a green sash, and sort of a beneficent, peaceful look on her face.

I burst into tears.

I then tried to explain what I affectionately called, “The Great Star Versus Angel Debate,” that went on in my household for most of my young and adolescent years. Mom wanted a star on top of the Christmas tree. Dad wanted an angel. We had a fancy star that lit up from the inside when I was young, that both parents liked, but perhaps one move, or one Christmas too many, and the light was broken beyond repair. Then the debate really raged. My mom and dad solved this problem, as they often did, by neither one giving in. One year, there was a star.  The next year, there was an angel.

This particular year (1993), we were living in New Mexico, and dad had proudly come home with this beautiful, classy, angel tree-topper.  We bought a tree;  we decorated the tree with the angel on top, and we were proud of the tree. My dad thinks, “the gaudier the tree, the better.”  He said so every year.

My brother, Bill (not his real name), was a philosophy major at the University of Virginia. When we brought him home from the airport, he took one look at the tree, and declared, “What is Hester Prynne doing on our Christmas tree?”

Being a literary family, we all burst into spontaneous laughter. We thought ourselves so clever!

So we incorporated Hester into our family Christmas, and didn’t really think much of it. I forgot about it, actually.

But when Chris unwrapped this angel, this Hester Prynne, a few days ago, it hit me. I was completely unprepared to have that emotional wave wash over me. I haven’t decorated a tree with my family’s ornaments since 2006, the year before my parent’s divorce. We haven’t met for Christmas, all of us, since then. All those feelings — those happy memories, the sad memories — immediately came back. The layers and layers of our lives are wrapped up in stories. Our experiences, when we have them together as a family, leave these memory-marks.

I wanted to call my brother Bill, and remind him, and have a good laugh. Then I remembered, “Oh. We’re in a fight. He doesn’t want me to call him. He wants me to email him and not expect a response for 24-48 hours, until after he’s mulled it all over and thought out a way to respond.”

Usually, our email correspondence follows the trajectory of a sinking ship. So much detritus and a wide debris field. There’s too much pain between us to keep a nice conversation afloat for very long. Our real-life conversations are like that too:  short, surface, smiley-faced. That’s okay. It’s a good fight — a good fight to be in. I think I finally understand how I hurt him and I think he might understand how he hurt me. There’s so much pride involved, so much anger: so many painful memories. I want to let my part of it go, and I have, and when it comes back up I will let it go again.

For many years, Christmas was my least favorite holiday. There were good reasons — seasonal affective disorder, disgust with rampant consumerism, but mostly it was this: Christmas is the time when we remind ourselves collectively the way we want to be, and we still behave the way we are. The wide gap of the difference between the ideal and the real is not something I want to contemplate for a whole month, every year.

My husband’s experience of Christmas is far more positive. Now that we are building our own little family experiment, I may lean towards his wisdom and happiness until I can find some of my own to add.

Prayers for you and your family during this holy month.