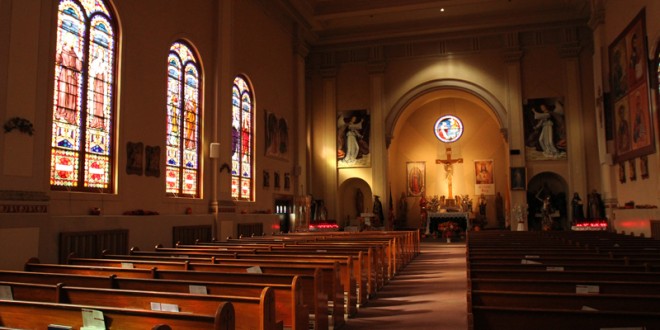 (RNS1-may11) The interior of St. Roch Church in the Staten Island borough of New York is seen between Sunday morning Masses on Nov. 2, 2014. RNS photo by Gregory A. Shemitz

So many voices, so few willing to listen and really hear

No sooner had the gavel fallen to end the meeting than I was outta there!!! I wasn’t just racing to my car so I wouldn’t get caught in a mini-traffic jam. I was racing to get away from the agony I had just spent three hours sitting through.

“Agony” may be too harsh a word but you have to understand where I was — and am — coming from. The May 30 session was the last in a 10-month series of meetings of a regional church organization that was intended to give us a realistic understanding of where our church body is, and where it and the individual congregations would go next.

“Intended” is the operative word here. I don’t think we achieved what God intended.

At a meeting earlier in May I noticed an outside observer — a professor of religion at a prominent university — walking out, his heavy computer case slung over his shoulder. I ran to catch up to him and said, “I don’t mean to paint you into a corner or to make a point, but I just wanted to know: What do you think about what’s going on here?”

His reply was blunt. “They’re not ready to do the things they’re talking about doing.”

I nodded. “I’m glad you said that. At least I’m not the only one who thinks that way.”

This professor spent considerable time last summer, during “formation” sessions, trying to get the delegates to understand how important it is to listen to the Holy Spirit when identifying problems and making decisions about how to correct them.

I was elated that this was the focus of our first session and I had great hopes that this would really be a Spirit-led series of meetings. I was wrong, and I heard that from more than one cleric in our denomination. As one told me, it sounded like the head of our regional church knew what he wanted and he orchestrated things to make sure he got what he wanted.

When I told the professor it appeared to me the delegates were not responding the way God wanted, he replied, in effect: They won’t listen to that so don’t waste your breath.

That’s the problem our church faces. And I’m not referring just to my portion of it, but to the entire Christian church – Christ’s people. We don’t want to listen to Him. In fact, I’m pretty sure most Christians don’t know how.

For example, the most compelling statistic I heard during those 10 months of meetings came just before the professor’s abrupt departure, when a speaker said only 6 percent of active church-goers in our denomination confess to a personal relationship with Jesus. Translation: Only a handful of us know how to speak to, and listen to, Jesus.

I had the chance in early June to go to a long-range planning meeting of a multi-denominational regional Christian services agency, but got sick and had to beg off. As I prayed about that, I thought God was telling me it would do no good for me to go there and teach them the lesson I’d learned from the earlier conference because they’re not willing to listen either.

As I silently bemoaned the deafness of our denomination while in the quiet of the men’s room on May 30, I heard God reassure me, “I’m still in charge of my church.” At times it’s hard to hear that and be satisfied with it.

It is genuinely hard for us to listen to God speaking to us through one another because if I admit that you’re correct and are revealing God’s truth, that almost by definition means that my thinking is incomplete or inaccurate in some way. Nobody enjoys being corrected. Look at Peter. Just minutes after revealing the Lord’s true identity, Peter was called “Satan” by Jesus because he was now speaking like men and no longer like God.

One of my first prayers every day is to ask God to show me where I’m wrong because until He does I will think I’m right and won’t allow myself to be led in right paths for His name’s sake (Ps. 23:3). If I can’t admit I’m wrong then the only conclusion I can draw is that I’m always right. And if I’m always right that must mean I am God.

I read with great interest not only Eric Blauer’s recent column on how tolerance is strangling pluralism but also the responses to it. Eric’s plea to be heard and understood is matched by the same desire among those who disagree with him. I appreciate the genuine passion on both sides. Both make valid, serious points.

But what is the point of being heard if no one is really, truly listening not just to the other individual but to God? What’s the point if those involved in the conversation cannot or will not admit they’re wrong – i.e., that they’re not God? As I’ve already suggested, only God can provide the grace to do that. And as the conduct of those aforementioned meetings clearly demonstrates, that’s when we slam and lock the door.

Previous Charlie Charlie: the real challenge is for adults to think critically
Next Newsboys coming to Spokane, ticket sales begin this month

Well said, my resistance with church comes from what appears as a lack of engagement. I mean lets face it, would the kingdom we pray for employ this type of economic system or monetary system. Yet even the Kingdom of God on earth has these aspects of a society led by a King. So my guess is the church does not know this or is fearful of its possibility.