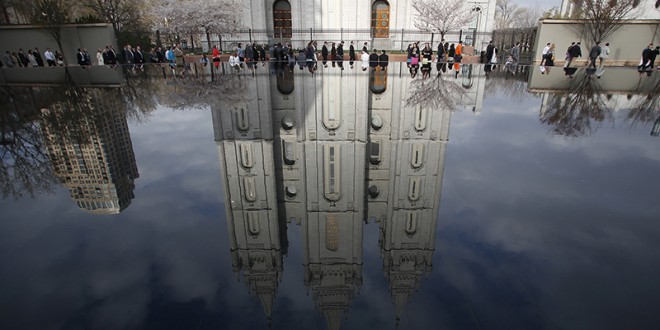 (RNS1-jan27) People walk past Salt Lake temple as they arrive to attend the biannual general conference of the Church of Jesus Christ of Latter-day Saints in Salt Lake City, Utah on April 5, 2014. For use only with RNS-MORMON-GAYS, transmitted on January 27, 2015, Photo courtesy of REUTERS/Jim Urquhart

On Sunday the Church of Jesus Christ of Latter-day Saints created its sixth stake in Spokane County.

The new Mount Spokane Stake will be overseen by President Jed McKinlay, who will be assisted by two counselors, Matthew Borders and Darin Christensen.

A stake is defined as a collection of six to 12 congregations in a geographic area, with each congregation having approximately 300 people.

Previous Ask a Jew: Do Jews mix socially with other religions?
Next Viewpoints: Is gun control a religious issue?

This is a milestone that is good to note for the history of Spokane.