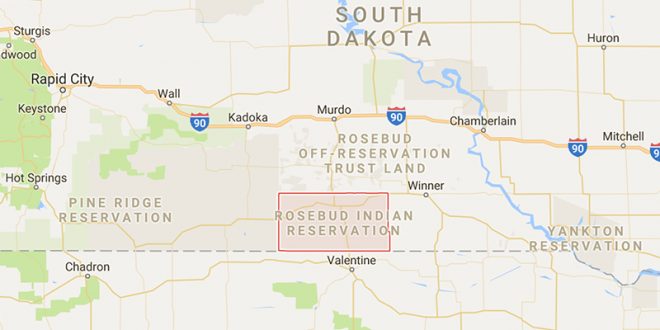 The Rosebud Sioux Indian Reservation, highlighted in red, in south-central South Dakota. Five hundred acres will be returned to the Rosebud Sioux tribe in the general area. Map courtesy of Google

The Jesuit-run St. Francis Mission, which serves the Lakota peoples in south-central South Dakota, announced it will return about 500 acres to the Rosebud Sioux tribe, a band of Lakotas with a reservation in the same area.

The land was given to the Jesuits in the 19th century by the U.S. government. It is in multiple parcels across several counties and includes some now-closed churches and other church structures.

“It’s now time to give back to the tribe all of those pieces of land that were given to the church for church purposes,” the Rev. John Hatcher, president of St. Francis Mission, said in a YouTube video. “We will never again put churches on those little parcels of land. But it’s an opportunity to return land that rightly belongs to the Lakota people.”

The Society of Jesus, commonly known as the Jesuits, has made reparations to other minority groups before. Last month, Georgetown University, a Jesuit school, apologized for owning and selling slaves.

“I think it is an important gesture on our part which sort of  says  … we are out of, in a certain sense, a colonial approach to the work of mission,” Hatcher added. “We want an adult relationship with the people of the Rosebud.”

Harold Compton, deputy executive director of Tribal Land Enterprises, the Rosebud Sioux’s land management corporation, estimated the land may be worth as much as $2,000 per acre. But that is not the real importance of the return.

“It’s the symbolism of returning,” Compton told Catholic News Service. “This land was categorically reserved by the government for the church’s use. So, the church returning this to the tribe is a plus for everybody.”

Previous How the hijab has grown into a fashion industry
Next Ask a Buddhist: Who made the rules for Buddhists?