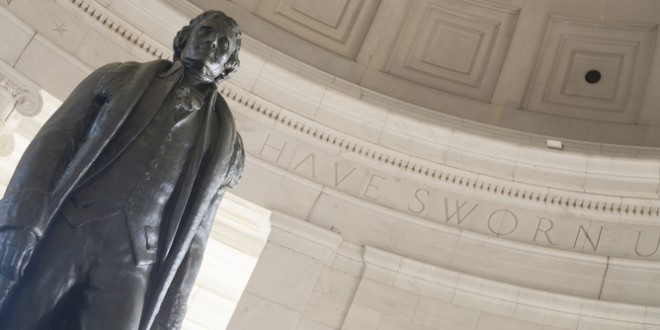 Sins of the Founding Fathers: The perils of judging past heroes by today’s standards

Democratic parties in four states have recently removed the names of Thomas Jefferson and Andrew Jackson from their annual fundraising dinners, a move now under consideration in at least five other states.

Proponents of this initiative argue that any party that seeks to identify itself with equality and diversity cannot afford to be associated with the slave-holding Jefferson or the Native American-persecuting Jackson.

At issue in such debates are deep differences of opinion about the relationship between the past and the present. Those who seek to depose Jefferson and Jackson believe historical figures should be held to the same standards of conduct we apply today.

They regard slavery and the forced relocation of indigenous peoples as so heinous that anyone guilty of them, regardless the age in which they lived, should be censured.

Yet there are reasons to be more circumspect in our judgments about such figures. For one thing, Jefferson and Jackson, though far from perfect, made enduring contributions to our nation’s history. Jefferson, for example, drafted the Declaration of Independence, served as both the nation’s first secretary of state and third president and completed the Louisiana Purchase, effectively doubling the size of the United States.

Jefferson and his legacy have been one of the world’s most influential forces for democracy, republican government, and the rights of the individual. In addition to his political contributions, Jefferson vigorously promoted the sciences and arts and founded the University of Virginia. And though Jefferson owned slaves and may have even fathered multiple children with a slave after his wife’s death, he opposed it in his writings.

In addition to founding the forerunner of today’s Democratic Party, Jackson was a military hero who served two terms as the nation’s seventh president, dismantled the national bank, overcame an effort by South Carolina to nullify federal law, secured Florida from the Spanish, and paid off the national debt. Of course, Jackson was also a slave owner and he forced Indian tribes from their lands, precipitating the so-called “trail of tears.”

In censuring such men, we run the risk of throwing out the baby with the bathwater. Should we strike George Washington from our coinage and change the name of the national capital because he was a slaveholder? Should we dismantle the Lincoln monument because our 16th president once favored the deportation of freed slaves? Should we shun the multiple US presidents who appear to have been involved in extramarital affairs?

While never disregarding any historical figure’s flaws, we should also remember that each generation of human beings depends on the cohorts that came before it for its religious and political institutions, its science and technology, and even for the very language it speaks. There is much to be gained from maintaining a balanced sense of respect and gratitude for the benefactions of our imperfect forebears.

Despite their shortcomings, men such as Jefferson and Jackson deserve our continued respect. Each rendered remarkable public service, and the time-honored stories about their lives represent cultural treasures that deserve to continue to be passed down from generation to generation of Americans. These narratives have the power to fire our imaginations and shape our characters in ways that abstract ethical and political principles rarely can.

There is no question that Jefferson had his flaws. In his dealings with his presidential predecessors Washington and Adams, he engaged in rank deceit and subterfuge. Yet he cherished books, collecting nearly 6,500 that eventually formed the nucleus of the Library of Congress. He is thought to have written no fewer than 19,000 letters during his lifetime. And he was also a doting grandfather who taught his grandchildren to play chess and loved organizing races for them.

Jackson too was a human being with human flaws. He once killed a man in a duel, and carried that same duelist’s bullet in his chest for much of his adult life. He was also the target of the first attempted presidential assassination, which he survived only because both of the assailant’s pistols – later found to be in good working order – misfired. And though Jackson signed the Indian Removal act, he also adopted two Native American children.

At stake in the debate over Jefferson and Jackson is an even larger principle. We live in an age that likes to label people as Democrats or Republicans, liberals or conservatives, and so on. Such labels often obscure more than they reveal.

Treating people in a one-dimensional fashion not only oversimplifies their politics but also threatens to rob them of their humanity. Character flaws deserve scrutiny, but they should not prevent us from admiring our nation’s heroes.

Previous Prayer vigil tonight for wildfire relief
Next The dharma of dollars: What Buddhism says about money, meaning