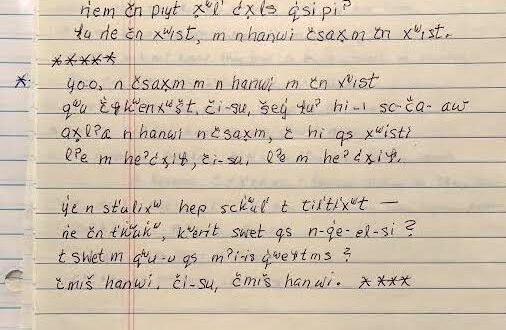 Hymn "A Closer Walk with Thee" translated into Salish/Contributed

Even though the late Spokane tribal elder Pauline Flett was most known for her dedication and vital role in preserving and reviving the Salish language, she also spent time expressing tribal spirituality through her religious background.

For decades, she dedicated herself to documenting and teaching the Salish language, playing a key role in its preservation before she died of natural causes on April 13 this year at 93.

Growing up in a Catholic and Presbyterian household, Flett attended both churches and learned to play music, which would later help serve her in her mission to revitalize Salish and promote spirituality.

Joshua Flett, her grandson, described how she and her husband, Arthur, traveled to Psalm fests and sing hymns, among other things related to Presbyterianism.

Sulustu “Barry” Moses, executive director of The Language House of Spokane, described how she promoted faith and spirituality from a variety of traditions, always infusing it with Salish. Some of the songs she sang included “Amazing Grace,” “How Great Thou Art,” and “A Closer Walk with Thee.”

Not only did her work in translating Presbyterian hymns into Salish, along with another individual who did the same with Catholic hymns, help Presbyterians learn how to sing in the language and give the music more flavor, Flett described, it also “helped us language speakers learn how to put words together and how these harder concepts be translated in how they see their world.”

Because a word in Salish could have multiple meanings, depending on its usage, Joshua Flett described how his grandmother would work on translating religion-specific words into Salish up until her final days. Notebooks upon notebooks filled with translations of different songs that showed, not only a dedication to the language, but also to spirituality.

“I heard one elder say that with all of the negative aspects of how the Presbyterians and Catholics came in and made people convert, the elders say that we’re all praying to the Creator, which is called by different names, so in that way they made it their own and what she did was she helped translate some of the hymns into the Salish language,” he said.

Within their family, Joshua Flett described his grandmother as their monarch who was their prayer leader during gatherings and presented children with their Tribal names. Not only that, she was a hymn leader at funerals, sang at Psalm fests and Bible camps and other events in places such as Yakima, Warm Springs and others.

There were times where she requested Moses’s assistance when he was a child where he dressed up in his regalia and they would educate people about Native American issues from a faith perspective at a church.  He said that he acted as her back-up while she sang.

In one of his earliest memories of Pauline, Moses was at his grandmother’s funeral when he was in high school and Pauline Flett, with her songbook in hand, sang at the gravesite as dirt was put over the grave. As she sang the hymns, Moses tried to sing along despite not knowing the Salish words, which caught her attention.

She walked over and told him how it made her so happy to see him trying to learn the songs. She put her on the songbook and said she wanted him to know that was what she wanted their people to hold onto. Since then he has tried his best to learn as many of the Catholic hymns he could.

“So much of the work that she did around language, obviously I think it’s the most important aspect of her legacy, but in my view what often gets overshadowed in that is that she was equally passionate about spirituality,” Moses said. “And it wasn’t attached to any one denomination, it was really just have faith in God, believe in your prayers and believe in your songs.”

Previous Ask A Muslim: Islam and Homosexuality
Next Life and Death in the Time of COVID