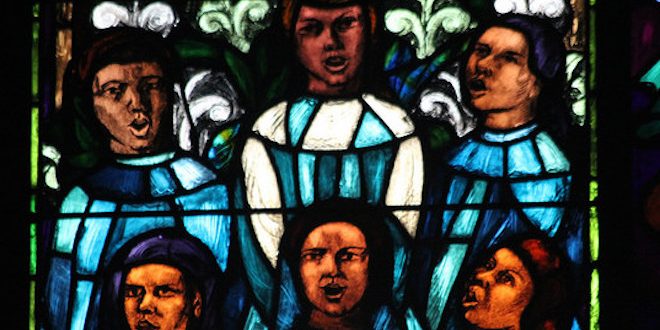 Sing through the fear, hatred

Throughout history, when hatred and injustice have spread their dark, spindly shadows across humanity, one practice in particular has assuaged the terror of injustice. In concentration camps, amateur and professional musicians wrote some of the most plaintive and heartrending anthems of hope ever penned. While the Titanic was sinking, a string quartet played Nearer My God To Thee, and from the tragic assassination of Harvey Milk was born an entire choral movement dedicated to massaging the hard hearts of those who stand against equality. Historically, our corporate response to hatred and fear has been simply to sing.

When I became the director of outreach for the Northwest Sacred Music Chorale, I recognized a need to promote the ensemble in a way that would honor the sacred choral repertoire while also making it vital and relatable in the current cultural climate. In discussing membership with several of my musically-inclined friends, it became clear that the hangup wasn’t the music itself; it was the membership. My friends, who are overwhelmingly some flavor of LGBT+, were concerned that the chorale was churchy and thus comprised of judgmental blue hairs. Singing music written by dead cisgender white Christian men to adulate a Judeo-Christian god who has historically been proported to disapprove of who they are is not an effective recruiting tool. Additionally, the term ‘sacred’ carries with it a certain Christian connotation — and that sometimes doesn’t sit well with people who are not of a particular faith. The conception of my outreach campaign was providential in its timing, as it is Pride month and, according to OutSpokane chairman Michael Jepson, the marriage of faith and Pride is a necessary and fortuitious one.

Jepson, a self-identified cultural Catholic, says “While many members of the LGBTQ+ community have left the faith of their upbringing, many still find or seek comfort in the rituals, practices, and cultural traditions.  Sacred music is a powerful force to many.  Beethoven was almost excommunicated for representing the consecration of the host with a single violin in his Missa Solemnis (sic).  While frequently written decades or centuries ago, this music is an attempt by humans to find a connection with the power of the universe.  It is not, and cannot be, static.  Hearing a production of sacred music recently, I was initially struck by how the first song hit all the notes I was expecting – self-satisfied, stiff, overly formal. As the evening progressed, either the arranging changed, or my preconceived notions were shattered.”

I went through a period of discernment as to how I should model my outreach program, toiling over how I could make the prospect of singing things like Handel’s Messiah uplifting, exciting, and lacking in the aforementioned stiffness and self-satisfaction. It didn’t take me long to realize that I needed to look inward for that guidance.

Up until recently, I was not out as a trans man — at least, not within the chorale. With the introduction of I-1515 and other anti-trans and GLB initiatives throughout the country, the timing seemed providential and I began to conceive of an outreach program which would shatter the perception of a sacred music chorale being stodgy, high brow, and inaccessible. I drafted a letter to the board of directors for the Chorale, and on May 21 read that letter aloud – coming out as the organization’s first transgender singer in doing so. I made plain my goal of making the chorale accessible for all, and touched on the need to make the ensemble a safe space for musicians and singers from diverse spiritual and personal backgrounds. To be honest, I was terrified; I am still terrified. It is a dangerous time to assert a non-cisgender identity, especially as a director in an organization which has historically been patently Christian and whose audience is overwhelmingly the same. Nevertheless, I am guided by my conscience and what I know is true; and in a place deep within me, I know that this is the right thing to do.

There is a need for healing in our community. There is a need for reconciliation, for affirmation, and for fellowship which transcends the barriers of faith, sexuality, and gender. Once again, we find ourselves in a time when we must turn to our brother, take his hand in our own, and sing. We must cast down the venomous machinations of a society whose rules seek to divide us; we must move boldly forward in love and acceptance, and what better way to illustrate our solidarity than coming together to sing the most beautiful, inspired choral literature in the world? If you do not sing for God, then sing for the man or woman next to you. Sing to honor your own divinity. We may be the Northwest Sacred Music Chorale, but we exist to uphold and affirm the worth of all who join their voices with ours.

In our sick and bloated world, artists are the harbingers of hope and humanity. It is my goal to create a place where we can all raise our voices to honor the sacred choral repertoire, finding divinity and purpose however we can as exactly who we are.

Despite having grown up in Spokane, this will be my first year attending Spokane’s Pride festivities. I will be an acolyte during the Pride Interfaith service, and I’ll be security — standing right under what I’m certain will be a stunning fireworks display to mark 25 years of Pride in Spokane. If you see me out and about, ask me about the Northwest Sacred Music Chorale. Ask me about how they have welcomed me with open arms, and how we can affect change through the power of sacred choral music.

Finley Romano is the director of outreach for the Northwest Sacred Music Chorale and a Spokane native. He is active in the regional music community, singing with the Spokane Choral Artists, Opera Coeur d'Alene, and NWSMC. He is the first openly transgender member of each of those ensembles, and is probably the first professional trans opera singer in the state of Washington. Romano is, by his own admission, some bizarre and delightful amalgam of Russian Orthodox and Wiccan. He self-identifies as a witch with Talmudic morality. To be honest, he has no idea what his spiritual leanings are and is content to explore them as he continues a decidedly inclusive outreach campaign with the Northwest Sacred Music Chorale.

Romano is currently writing a book, For My Great Size, which details his experiences transitioning from mezzo soprano to bass-baritone.